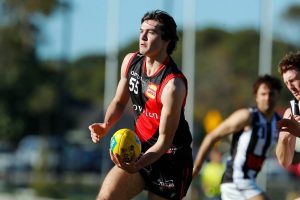 Coming into 2020, Logan McDonald was pegged as a potential first round selection, but his outstanding form at WAFL League level has seen him rocket into the top five conversation. A key position forward with terrific craft inside 50 and elite endurance further afield, McDonald put his name in lights with 21 goals across nine senior games this year; being held goalless just once and booting multiple majors in seven of those outings. While he has come on leaps and bounds as a top-ager, the West Australian appeared on the draft radar after earning Under 16 All Australian honours in 2018, before going on to represent his state’s Under 18 side thrice as a bottom-ager. McDonald also featured in the Under 17 Australian team which took on New Zealand, and ran out on AFL Grand Final day in the Futures All-Star showcase. To cap off his outstanding campaign this year, he performed solidly in Game One of the WA Under 18 All-Stars exhibitions, before calf soreness saw him ruled out for Game Two. He could well end up as the first player taken in 2020, an honour which would prove great reward for a remarkable season.

McDonald delivers an overall forward package which proves incredibly complete for a player of his age. Having cut his teeth at the senior grade in Western Australia, the 18-year-old has also proven he is a readymade type who can match it with more mature bodies and experienced heads. McDonald’s forward craft is sound; able to present with smart leading patterns, dominate one-on-one situations, and constantly find the goals. Even on down days, McDonald finds a way to pop up and hit the scoreboard with punishing conversion from a variety of ranges and situations. He only needs a few chances to do so and earns each opportunity, most often via contested marks when battling one-out against his direct opponent.

In his time close to goal, McDonald’s ability to own his area really comes to the fore. He protects the drop zone very well from long balls into the attacking 50, making most entries work with his clever positioning and bodywork. It was a marvel to see his strength as an 18-year-old at times, able to hold off senior adversaries, push off at the right time to mark, or rise straight up to clunk the ball under heat. He does tend to rely on taking the ball on his chest a little, a trait which may see him come undone a touch under the pressure and pace of AFL football, though he is certainly capable of stretching for overhead marks going back with the flight, or leaping up over the back of a pack.

Compounding his aerial impact is McDonald’s goalkicking rate. It is all well and good taking marks inside 50, but being able to translate that threat to the scoreboard is arguably the most important job for a forward. With 21 goals in nine games this year and seven bags of multiples, McDonald certainly does that. He can snap home around the body from tight angles, slot through straightforward shots within 30 metres, and also sink team-lifting long bombs. His confidence at times this year bordered on arrogance, as he would often mark nearly 50 metres from goal and almost immediately point to the big sticks. But McDonald backs it up, slamming home those long-range set shots to prove his natural forward craft.

One of the main assets which sets McDonald apart is his endurance, something which has seen him draw comparisons to Nick Riewoldt. A preseason yo-yo test score of 21.3 and 2km time of 6:33 at the national combine suggest he is elite in that department, especially for a player of his size. He is able to utilise it on-field too, gaining good separation from his opponent up the field and presenting an option to link into attacking 50. In the WA Under 18 All-Stars game, McDonald was kept quiet around goal, but made his mark by working up past the wing to get his hands on the ball. From there, his skills by foot are generally quite clean and he has the kick penetration to send his side into attack quickly when the opportunity presents.

In terms of improvements, McDonald’s versatility is somewhat untapped. While he can play deep as a full forward or further afield as a modern day centre half-forward, the Perth product has not particularly been tried down back or in the ruck for extended stints across a season, at least not at the current level he is playing. However, if he is so good up forward, it seems hardly necessary. McDonald tests well in the power tests such as the 20-metre sprint (3.029 seconds) and vertical leap (82cm), but is not massively explosive. Enhancing these areas will allow him to become an even more dominant key forward, as he could potentially burst off the lead or crash packs better than he currently does. Mixed with his high-level endurance, it would really compound his overall impact both inside 50 and up the ground.

As a club looking for a key position forward, there is not really much more you could want than what McDonald offers. His body of work this year could well see him end up the number one pick, pending whether Adelaide does not bother to place a bid on Jamarra Ugle-Hagan off the bat. It is unlikely that he slips past pick three, especially given the fact that North Melbourne holds pick two and would be wise to seek a long-term replacement for Ben Brown. At pick three, Sydney may have interest elsewhere but would definitely consider McDonald, and perhaps a more conservative range would be to extend his projection out to 1-5. With Joe Daniher out the door, do not rule Essendon out of the equation if they can trade up into the top three.