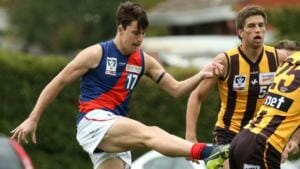 A consistent midfielder/defender with Coburg who was thrust into the spotlight earlier this year as a possible mid-season draft pick-up following a strong 12 months of work. He missed out but continued his form throughout the VFL season, averaging more than 22 touches a game and is versatile enough to play on talls or smalls. He needs to work on his kicking – just 52.9 per cent efficiency – but won back-to-back club best and fairests to show his high-level credentials and quality. A good size (94kg) and ripe age (25) means Dickson is as readymade as any of the state system prospects, with proven form at local level in the EFL and now at the step below the AFL putting him in good stead.