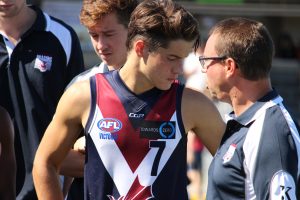 DRAFT ANALYSIS: "After missing the National Under 18 Championships with a broken jaw, he has rocketed into first-round calculations through dominant TAC Cup performances, which saw him recognised with the Morrish Medal as the league’s best player this season."

Having finished his schooling in 2017, Liam Stocker has had the benefit of absolute TAC Cup commitment this season and has flourished. The Haileybury product, who could follow in the footsteps of fellow 2017 alumni Andrew Brayshaw, Luke Davies-Uniacke and Aidan Bonar to be drafted in the first-round, has the rare ability to break games open. The 183cm midfielder initially caught the eye in round three of the TAC Cup season, with a damaging 21-disposal, two-goal display against the Calder Cannons at home. Stocker’s ability to rest deep in the forward-line and hit the scoreboard was also particularly notable in Round 3 of the TAC Cup, drawing comparisons to Richmond champion Dustin Martin as a result.

Missing Vic Metro’s crusade in the National Under 18 Championships with a broken jaw, Stocker’s name did not seem to feature in the conversation of 2018’s top prospects mid-year, but a dominant back-end of the TAC Cup season saw that change. The inside midfielder plays with aggression and tenacity and contributes in all facets of the game, having averaged 23 possessions (12 contested), six clearances, five inside 50s and five tackles from 12 games this season. His status as an elite midfielder became apparent when the Dragons hosted the Pioneers, gathering 35 disposals together with four marks, five tackles and a goal. The St Kilda supporter capped off a memorable season with the coveted Morrish Medal, recognised as the TAC Cup’s best-and-fairest, three votes clear atop the leader-board. It puts the talented junior cricketer in favourable company, with Richmond cult-hero Jack Higgins, Demons ball-magnet Clayton Oliver and Brisbane Lions Rolls-Royce Hugh McCluggage the past three recipients of the award.

Stocker’s aggression, explosiveness and tenacity combine to make the oft-used term ‘midfield bull’ quite the fitting description, while he leads through his commanding voice and — more importantly — his actions. Indeed, while Stocker can often be heard ordering direction, his unrelenting attack on the ball is likely to inspire teammates wherever he plies his trade in future. In addition, the midfielder’s versatility, on show when resting at full-forward, is another feature likely to catch the attention of multiple clubs ahead of the 2018 draft. The type of player that makes opposition defences nervous, he presented a constant threat when deployed out of the goal-square. At 83 kilograms, Stocker’s size caused headaches for opposition midfields throughout the season, making him an AFL-ready prospect for 2019.

Stocker showed through the finals series he can play through adversity, which he did while having a clear shoulder injury. He has shot up the draft boards from last season to this year after a huge pre-season and his consistency since coming back from his broken jaw has been noticeable. It is how he earned the Morrish Medal with many best on grounds through Sandringham’s season which was mixed, often playing in a team missing its top players through school football, but his game never wavered. Even upon their return, Stocker’s consistency remained. He also achieved a massive 85cm running vertical jump at pre-season testing, which is why he can play effectively up forward.

Stocker’s game does not present any obvious flaws, but by his own admittance, his endurance could improve, stating “I’m not really fit enough to be an outside mid, so I base myself on the inside and try to get as many clearances as I can”, after being presented the Morrish Medal. While seen as an inside midfielder — focusing on winning contested ball ahead of running all day — his endurance may yet need to improve for AFL level next season. Another potential question mark could arise over Stocker’s durability, who apart from a broken jaw, sustained multiple niggles throughout the season, playing just 12 of a possible 20 TAC Cup games.

Liam Stocker is simply one of the best midfielders in this year’s draft crop. He appears ready to play against men and would be a strong chance to do so at AFL level in 2019 if he can get his body right early on with a full pre-season behind him. Stocker is an elite inside midfielder who bursts out of stoppages, is dangerous when drifting forward, tackles hard and takes marks around the ground. His ability to have an influence throughout four quarters is very good and expect him to be high on a lot of club’s draft boards.