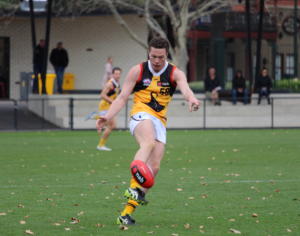 A latecomer to the Dandenong Stingrays’ program, Scott played the final three games of the season through the midfield where he averaged 16.3 disposals per game. Despite being predominantly an inside midfielder with good size, he spent time on a wing, and will need to improve his tank and sharpen up his kicking skills. Scott is a contested bull with strong hands who will be a long-term prospect. Having spent the season with Haileybury College in the APS system, Scott showed enough development throughout the season to earn a state combine invite. While his areas of improvement are clear, he showed that he is more physically readymade than most his age and the overager had his moments for the Stingrays as well.