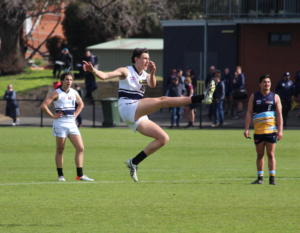 DRAFT ANALYSIS: “McMahon is an athletic key forward with a terrific vertical leap and high-marking ability, making him an eye-catching prospect.” – Michael Alvaro

Northern Knights product, Liam McMahon came on strongly as a bottom-ager, earning a permanent role in his region’s NAB League side with 15 appearances across a promising 2019 season. The high-marking forward showed glimpses of his eye-catching athleticism, most notably inside attacking 50 as he leapt to mark the ball at its highest point. He also fulfilled his goalkicking duties, averaging just under one per game and twice managing to bag three majors in a single outing. His form warranted selection in the Vic Metro Under 17 Futures side, where he impressed up either end against Queensland. Having entered the AFL Academy pathway as a top-ager, McMahon had been working on his forward craft and running patterns before all Victorian football seasons were cut short. He looms as a key forward option with plenty of development left who could provide great value later in the draft.

It hardly takes too many viewings to identify what McMahon does best. Some of his most productive games saw him kick goals rotating out of the full forward spot, where he favoured the back position from long entries, and got on his bike to lead towards quicker breaks into the attacking arc. The timing and height on his vertical leap is what sets him apart, with his ability to mark the ball at its highest point an invaluable key forward trait. That same vertical aptitude also saw him take on some ruck duties at 194cm, and could even bode well for development as a third-up defender who can intercept aerially. For now, it is predominantly used inside 50 or when searching to link further afield.

Something which makes McMahon somewhat of a project player is that athleticism, but also his size. While he can make up the difference in the air, the Northern product still has some filling out to do if he is to suit the traditional key position role at AFL level. Even in the Under 18s, McMahon proved much more effective when he didn’t have to engage in a wrestle with his direct opponent, with space to run and jump key to his success. His ability to gain separation is largely credit to his speed, while the smarts to often nudge his opponent under the ball and follow up at ground level showcases another nice avenue to possession. Still, building strength over multiple preseasons will add another string to his bow and make for a more complete forward game.

That strength, or lack there-of also translates to McMahon’s ability to hold onto overhead marks. While he certainly has a knack for clunking screamers, McMahon can sometimes spill the beans in dangerous positions and miss out on scoring opportunities. Given his output is relatively low, with averages of 8.3 disposals, 3.1 marks, and 0.9 goals in 2019, grasping those chances will be crucial to his prolonged success. Further to the point of output, McMahon was kept goalless seven times across his 15 NAB League games, so gaining and maintaining a level of consistency will prove the next step in his development. Being able to find more ball further afield and provide a linking target up on the wing will also boost his impact.

There remains a strong base to work off though, with some exciting attributes and a decent rate of development working in the youngster’s favour. He would have been one to really benefit from an extended top-age run, where he could have potentially showcased some added versatility and gained the required level of consistency as Northern’s primary forward target. He remains a more prospective choice for those reasons, obviously by no real fault of his own.

It may be a broad label, but McMahon is a prospect with plenty of upside who could be snapped up as a project player which clubs can develop over time. His athleticism and exciting aerial ability bode for interest from AFL clubs, which is only confirmed by his inclusion in the Vic Metro academy hub and an invite to the National Combine. The squeeze for spots will be tight past the 40-mark with list sizes likely to be cut, and that is about the range where McMahon sits. Even if he is pushed to the rookie draft or made to develop over another year outside the elite system, he looms as a shrewd choice, especially given plenty of clubs will be on the look-out for a key forward.