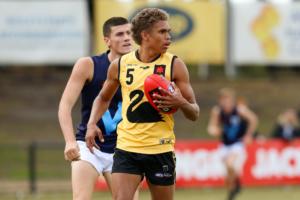 DRAFT ANALYSIS: "An extremely talented mid/forward with class and skill, Henry just has to spend time in the gym to cope against the stronger AFL bodies."

LIAM Henry is one of those players that you would love to see what they can produce on the big stage as they have all the attributes to take over a game. Blessed with speed and terrific foot skills, he will very likely be a big part of Fremantle’s future as Henry is a part of the Dockers’ Next Generation Academy.

Originally from the very small Wheatbelt town of Tammin, Henry played his WAFL football at Claremont where he made a considerable impact. The livewire was also a member of the Western Australia Under-18 National Championships winning team and was deservedly named in the All-Australian squad. Sadly, the Indigenous youngster could not add to his fine body of work as a knee injury sustained during school footy ruled him out for the latter part of the campaign therefore missing out on a Tigers premiership.

The 18-year-old is certainly fleet of foot, but you certainly would not call him a big midfielder by today’s standards. Weighing less than 70kg, he is likely to have spend a number of hours at the Dockers’ facility in Cockburn over the summer to get his body attuned to the buffeting that senior footy delivers.

Henry averaged 18 disposals at the carnival along with five marks, four tackles, three tackles and three goals which earned him a spot in the forward line of the U/18 All-Australian team. It was that level of performance which would have sealed the deal for the Dockers draft team, not that there would have been much doubt beforehand. His best performance came against Vic Country where he collected 26 disposals, five tackles, five rebounding 50s and four inside 50s.

Henry was restricted to just four games for the Tigers in his draft year – and two last year – due to a combination of injury and state commitments. But when he did play, he made a real impact. His standout game came in round three against East Perth when he produced a 24 disposal game along with five marks and four goals. He wasn’t too shabby in round 14 either when against Subiaco he picked up 26 disposals, six marks, three tackles and two goals.

Henry was invited to the AFL Draft combine, but due to his dislocated knee he was unable to test. That is a shame because it would have been fascinating to see how he went in some of the tests such as the 20-metre sprint and agility. Henry will go to a club in Fremantle with rich indigenous history and will learn plenty from the likes of Michael Walters and Stephen Hill, not to mention the current Brownlow medalist in Nathan Fyfe. The Dockers have often been criticised for lack of leg speed and skill level so the addition of Henry will be a major bonus.