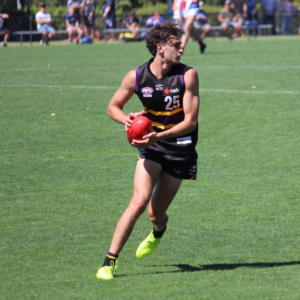 A reliable ball user coming out of the back half, Fiore is not a huge accumulator of the pill, but he just does a lot of nice things. He is capable of marking overhead and settling the team down with composure, but has not recorded more than 15 touches this season. With the defensive side of his game an area still to improve on, Fiore is versatile enough to play a wing and pump the ball inside 50. At 195cm, Fiore is capable of holding down a key position role in defence and while he himself wants to improve his intercept marking, the big man still averaged 4.2 marks per game this year, mostly as the switch player who used it well moving in transition. While he still has areas to work on, Fiore just ticks some nice boxes for a developing tall and always seems settled despite being under fierce pressure.

DRAFT CENTRAL’S INTERVIEW WITH LIAM FIORE AT THE 2019 ROOKIE ME STATE COMBINE: