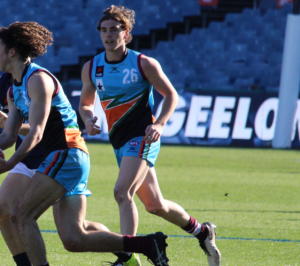 The versatile tall from the GIANTS Academy has been identified as a top prospect since the Under-16 Championships when Delahunty took out the Most Valuable Player (MVP) Award from the Division Two series in 2017. He has always been athletically gifted, good overhead and a reliable kick which makes him a promising prospect going forward. He has a number of areas he needs to develop to for to the next level with his consistency and tackling pressure the two main areas to look at when in an elite system. Delahunty is also an okay accumulator of the football, but given his athletic talents, he could easily end up being a winger with time and therefore winning more touches from sources other than marks, will be another area Delahunty can further improve to be that more damaging prospect. At 192cm, he is that slightly undersized key position player, so similar to Jonathan Marsh’s transition into the AFL at first with his athletic traits, coaches could well identify the utility as a future midfielder.

Delahunty is a tough one to judge where he lands. He is strong athletically and a nice kick – averaging more than 70 per cent by foot – marks well and can play at either end. He has mostly played roles which either involves being a pure goalkicker or a defensive stopper up the other end. With a 2.93-second 20m sprint capability he has shown in the past, as well as a 76cm vertical leap, Delahunty can utilise his speed on the lead and overhead marking to make it incredibly difficult for any opponent to try and spoil. This means he can play as a burst leading forward, or a defender who has great closing speed to spoil the ball away. With those traits alone, the GIANTS would certainly be tracking his progress and seeing that he has the talent to become something special at the elite level. For them, he might come cheaper than his talent may suggest, with the tall just needing to develop his consistency within games, because he can win games off his own boot, but can also not have an impact for a quarter or two if the game is not on his side’s terms. Nonetheless, his highlights package is as good as anyone’s when he is on, and his marking is one consistent feature of his game regardless of how many touches he gets. Aside form a quiet game in the NAB League against the Gippsland Power where he had the eight touches and two marks – still booting two goals – he would have otherwise averaged almost seven marks per games which is a remarkable feat. It goes on from his great leading ability and forward craft nous to create separation from his opponent with great speed.

Aside from consistency within games, the other area Delahunty can work on is his tackling pressure, averaging less than a tackle per game in the NAB League. He laid three of his four tackles for the competition in the Round 6 game against the Murray Bushrangers where Delahunty pushed further up the ground and showed off his midfield capabilities with 21 disposals, seven marks, seven inside 50s, three tackles and 1.2. Tall forwards are not expected to be tackling machines, but for a player of his speed and athleticism, one would expect he could run down plenty of smaller opponents. He is predominantly a marking player as already suggested, so often he is winning his ball from just that. In his first three NAB League games he took 19 marks in 34 touches, which means 55.9 per cent of his disposals came directly from a mark. While his strength overhead and sticky hands are remarkable, developing that midfield craft and winning more of the ball at ground level will be a strong step forward. This lends itself to improving his tackling pressure because it means he is working harder at ground level because Delahunty already knows he can beat his opponents in the air. Delahunty is a genuine talent who with his skills, athleticism, vertical leap and versatility will not only attract the GIANTS, but plenty of other clubs to his scope. He is more than likely a mid draft prospect, somewhere in the late second to third round and if the GIANTS or another club can further his development, he could be a real diamond in the rough with his raw traits.