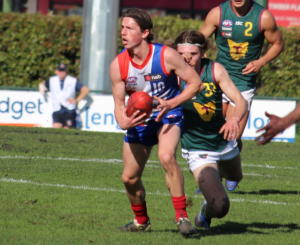 A clever outside ball user, Connolly has the right traits to play that running game in transition with nice skills, speed and a willingness to take the game on. He is set on building more of an inside game which will come with strength and also more resistance to opposition pressure which can sometimes impact his decision making. Averaged 65.7 per cent by foot but just 27 per cent was contested. Connolly has plenty of nice moves on the football field, able to use his speed to advantage when coming off half-back or along the wing which helps his versatility. At just 74kg he is still quite light, but his smarts and creativity in trying to open the game up for his teammates is important. While at times he can make mistakes, he always throws himself a challenge in the game trying to win the ball and gain as many metres as he can, to open up the field for his teammates. In 2019, Connolly almost doubled his disposal average from 11.5 to 20.0, while moving from one tackle to two – though it is still an improvement, but more importantly, averaging 4.6 rebounds per game.