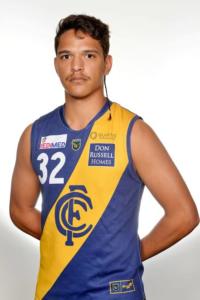 A Fremantle Next Generation Academy (NGA) member, Thomas is a developing player with plenty of upside. Having represented the Black Ducks at the Under-16 Championships, Thomas has elite speed (2.987-seconds on 20m sprint), and is able to play a multitude of roles in the back half. Best known for his goal-saving smother in the Colts Grand Final, he still needs to further build that defensive pressure. While much of the focus in regards to Fremantle’s NGA has been on first round hopeful Liam Henry, Thomas is that raw talent with high upside based on his athleticism and skills. Arguably considered a blank canvas by clubs, earning a State Draft Combine invite shows that Thomas has done enough to suggest he has interest outside of the Dockers, whether or not they choose to pull the trigger.