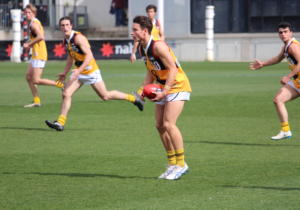 DRAFT ANALYSIS: "A talented utility with high upside, Williams can beat opponents in the air or at ground level, but still has to build a tank and work on his four quarter consistency."

A VERSATILE utility, Lachlan Williams is a player who has come on strongly in season 2019, showing an ability to play multiple roles and have a serious impact in the air. Williams has spent time at both half-forward and half-back for the Dandenong Stingrays, and even thrown onto a wing at times as he was eased into midfield minutes while his endurance base grew. He was predominantly outside, with his penetrating kick accompanying his contested marking ability and making him a real danger forward of centre. He could launch goals from outside 50, often in quick succession, but he just lacked consistency at times and this was due to his low endurance base. His upside is quite impressive and he is more of a late-to-rookie selection due to the adjustments he needs to make to his game in order to develop stronger, but he has some eye-catching traits with a big future if he can harness his strengths and a club can develop his game even further.

Williams is a player who ultimately has great upside because he has so many draftable qualities. For a player with his athleticism and vertical leap, Williams also is hard to beat in the air or at ground level, with his sticky hands a feature of his game. He has been superb at both the NAB League Fitness Testing Day and National Draft Combine, recording a 77cm running vertical jump at the start of the year before improving that to 86cm at year’s-end. In the pre-season, Williams also clocked a three-second 20m sprint and a strong 8.24-second agility test. All these areas speak to his handy athleticism that he has shown in bursts throughout the year. Williams had a low endurance base that he continues to work on, registering 20.3 on the yo-yo test and 7.33 on the 2km time trial at the National Draft Combine – and is a key reason why his consistency within games could improve. When on fire, Williams can kick multiple goals in a quarter playing up forward, quite often from long range set shots. Once he is able to have that kind of impact for longer, he will become a really damaging player.

One big tick to his name is Williams’ versatility, which is enabled by his athleticism and strength in the air, as well as his penetrating kick that can travel more than 50m. He has spent time at half-forward and half-back, and his two championship games speak to that inconsistency he just has to build on. In the massive Vic Country win over the Allies, Williams was impressive with 20 touches, five marks, four inside 50s and a goal, before barely getting near it in a full game against South Australia at GMHBA Stadium with just the four touches – three of which came in the second half. At NAB League level he averaged the 16.5 disposals and 5.6 marks, with almost identical inside 50s and rebounds at just over three per game. He can play on either flank or on a wing, with his inside game another area of development. Going forward, Williams is a player who will likely start at half-forward should he be picked up, and he is very dangerous around goals, while focusing on building his tank further to eventually become a midfielder, albeit still likely an outside one because of his ability to run and penetrate with his kicks. While he has those areas to develop, Williams has plenty for fans to like in the future, particularly as a value pick later in the draft inside 50.