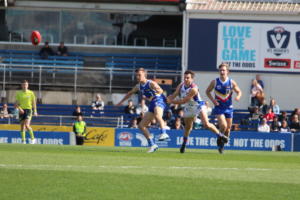 LACHLAN Stapleton is a lightly-built midfielder with a fierce attack on the ball. One of the NAB League’s most prolific tacklers – averaging 7.1 per game this year – Stapleton provided plenty of pressure in close and had lightning quick hands delivering to the outside runners. He had a 2.97-second 20m sprint and said he wants to apply that more to his game, as well as build his outside capabilities. Stapleton is one of those players who just ticks a lot of boxes and while he could improve across the board, is able to win the ball – use it fairly well and extract the ball from the contest with elite agility. He regularly runs close to an eight-second flat agility test, and with good strength for a player of his size and build, he is able to fend off opponents to get the ball free. His hands are incredibly clean, averaging 84.3 per cent efficiency by hand. Stapleton is one of the top State Draft Combine invites and his consistency this year should have been noted by clubs.