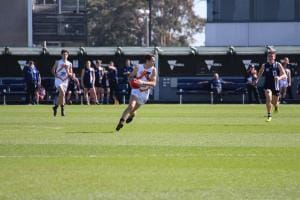 DRAFT ANALYSIS: "An elite runner with good footskills who will look to develop a contested side to his game."

Lachlan Sholl is an outside user of the football who has nice skills, good decision making and high football IQ. He gets to the right spots and often takes intercept marks, or spreads in the defensive 50 to help rebound out of the back half for his side. He played more of a wingman role at the National Under 18 Championships, where he averaged 16.7 disposals and six marks from three matches. At TAC Cup level, his averages were higher, averaging 24 disposals and seven marks, predominantly sitting at half-back and pushing up to a wing. He does need to work on the contested and defensive sides of his game, having a great ability to run offensively, with improvement coming the other way. He has enough about him to suggest a club will take a chance on the classy ball user, with a late-to-rookie projection. Sholl’s natural traits make him an enticing prospect, with plenty of scope to develop further.

Sholl is a productive outside midfielder who can play off half-back, along the wing, or at half-forward. He has a high endurance base and great skills which means he can impact a contest throughout four quarters. Both his disposals by hand or foot are impressive, but finding the ball predominantly in space means there is very little pressure on him when disposing of the ball. Nonetheless, he uses it well, and ran at 63.8 per cent by foot and 83.1 per cent by hand in the TAC Cup. His clanger percentage of 12.6 per cent is below average in a good way.

The other main attributes that make Sholl an impressive player is his footy smarts and decision making that allow him to pick the right options when given the choice, and not only execute appropriately but put it to his teammates’ advantage. He will win the ball in defence and then look to find the safe option to hold up play, or to try and look further ahead and kick long to a target along the wing. Overall, he has the ability to win the ball, pick and a target and use the ball effectively. Averaging the 24 touches at TAC Cup level, Sholl certainly has no issues finding the football, and he wins 40 per cent of his disposals through handball receives, which indicates that his teammates are more than happy to put the ball in his hands.

The two key areas of Sholl’s game that could be improved are his contested work and the defensive side of his game. He is impressive with ball-in-hand when attacking off half-back, but adding a defensive game would make him all the more dangerous. He averaged just the 2.1 tackles for the TAC Cup season and was certainly known more for what he did with the ball rather than without it. There are plenty of players over the time who have developed more of a defensive side as they progress, and when you use the ball as well as Sholl does and make the right decisions, you always seem to be on the offensive end of the scoring chain. Developing a contested game also means he can spend time on the inside, adding other ways to win the football and influence the contest. Both of these areas are areas that were not overly needed for his role at under-age level, but will be something to keep in mind for the elite level.

Lachlan Sholl is a player which clubs would look to in order to fill a role either at half-back or on the wing, with effective kicking and good decisions with the ball-in-hand. He does need to develop his defensive game and contested work further, but he has no trouble finding the ball. He is projected as a late-to-rookie prospect given the knocks on his game, but a club could certainly see the upside in a talented ball user with game smarts.