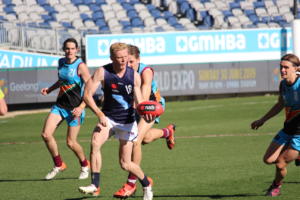 AFTER a quiet start to the season, the line-breaking speedster built form leading up to the Under-18 Championships, then self-proclaimed “underperformed” in the championships, and then got injured in his second game back. Possibly the quickest player in the AFL Draft crop, Potter would have pushed Knights teammate Sam Philp for the 20m sprint record this year, but unfortunately did not test at all in 2019 due to injury. Utilised off half back during the National Championships, Potter’s dash and dare make him an eye-catching prospect – albeit as raw as they come. Unafraid to take on the game and his opponents in the most compromising of positions, Potter always backs himself in to beat anyone for pace and often wins out, finishing with a long kick forward. He has the ability to rack up over 20 touches, but will need to trim down his clanger rate to better make use of the penetration he provides. Other improvements to be made include his contested work (29 per cent contested possessions) and decision making, with the small defender role beckoning at the next level.