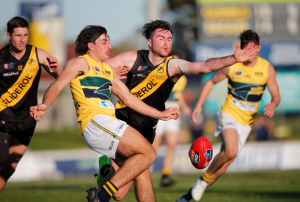 DRAFT ANALYSIS: “Lachlan Jones is a big-bodied defender who is capable of playing shutdown roles both tall and small, while also propelling rebounds out of the defensive half” – Eli Duxson

Lachlan Jones is versatile defender who has the potential to run through the midfield, but is a readymade prospect who will more likely slot into an AFL back six in quick time. Linked to the Port Adelaide Next Generation Academy (NGA), he has spent time training with the club and is expected to land there come draft night. At 186cm and 89kg, he is pretty similar in body composition to other Port defenders, which may see him develop his game through the midfield or in the forward line, however, playing all season at League level in defence is a good indication of his ability down back. He did play forward for a quarter against Sturt and managed two scoring shots (1.1) from lead up marks and set shots, so there is potential there.

All his attributes point towards a prototypical staunch defender, but the improvements he can make to his game could lead to midfield opportunities and a greater general output. While disposal count is sometimes unimportant for a defender, when he finds the ball more he uses it very well and can rebound from defence effectively. In the semi final against North Adelaide, he had 19 disposals and recorded a remarkable 11 rebound 50s. With his long, thumping kick or soft touch in the short range, his side has certainly been better off when he finds more of the ball, especially as he operates at 82 per cent disposal efficiency. Being in the premiership-winning Eagles side does not make it easy for a defender to find the ball, and there were seven occasions when Jones recorded a single digit disposal count.

His disposal stats and consistency are far from a serious issue, however, as he has proven all season that he is one of the more capable defenders entering the draft. His physical size and presence bode well during contests in the air and on the ground, with his speed and aggression through the line of the ball allowing him to clear congestion. He also possesses a strong ability to read the play and get to an attacking position in defensive contests, as well as a strong ability to read the flight of the ball which contributes to his aerial prowess to mark or spoil. In what proved the cherry on top of his campaign, Jones was awarded the mark of the year award for his Round 12 effort against Glenelg.

Having traded away this year’s first round selection to Brisbane, Port Adelaide will hope a bid for Jones comes after pick 10. Should a club bid at pick 11, the Power’s season-end picks of 26 and 31 would be enough to cover the points required, while their third round hand could cover any bid from further in the first round. Port will likely also look to bring in father-son prospect Taj Schofield, so being able to hold onto as much draft value as possible will be important. They are well placed to secure both players, while also having a couple of picks to spare. It is hard to see Jones slipping out of the top 15, so there looms a pretty penny to pay upfront.