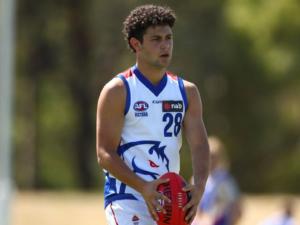 ONE of the interesting cases in terms of club links, Lachlan Johnson is the son of Brisbane premiership defender, Chris, but is also tied to Essendon through the Next Generation Academy. While Brisbane won the race for him, the club has nominated him as a possible rookie – it means if he is not taken in the National Draft then Brisbane can select Johnson without any challengers in the Rookie Draft, but also are not obligated to. On his form, his season ended prematurely after injuring his knee at school football having worked up his fitness after a mid-season overseas trip. Johnson shares similar traits to his father with his kicking, footy smarts and defensive work among his standout areas prior to his injury. His endurance and of course durability will be the question mark, and his ball-winning numbers could increase as well should he settle into a midfield role. At 176cm and 74kg he will likely play as a small defender using his kicking and footy smarts to best advantage his team. Defensively, Johnson averaged a whopping 7.2 tackles from his five games this year and was not afraid to crack in.

DRAFT CENTRAL’S INTERVIEW WITH LACHLAN JOHNSON AT THE 2019 ROOKIE ME COMBINE: