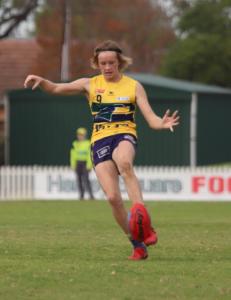 AN athletic player, Lachlan Hoile dominated the Under 18s, bringing his own ball to the game most weeks as he averaged 26.8 disposals, 5.5 marks and 3.6 tackles per game. His disposal consistency could be iffy at times and he still needs to add to his 72kg frame, but at 188cm he is that prototype midfielder with good athleticism and strong overhead which makes him a danger around the ground. Hoile’s form proved irresistible as he broke into the Eagles’ Reserves side in Round 10 after a 34-disposal effort the week before, but he could not quite find the same rhythm against more mature bodies and in slightly different roles across three outings. But his work rate on the spread and ability to find the pill are both key elements in his favour, with that scope for improvement at his side another bonus.