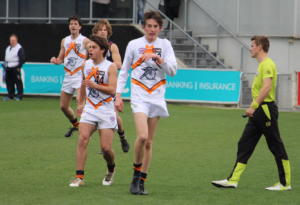 THE outside midfielder received a late call-up to the Cannons’ program after impressing for his school throughout the year. He is only a lightly-built player at 72kg to go with his 191cm height, but Gollant has great footy IQ as well as fierce defensive pressure. He is not afraid to lay tackles on much bigger bodies as he showed throughout the finals series, with a couple of great running chases. Averaging just 11.7 disposals as a midfielder, he will want to improve that area of his game, as well as adding more scoreboard impact playing as a winger. He runs to the right places and has the nice 191cm size that will attract clubs with some interest particularly peaking late in the season. He does not have the speed that others might have, recording 3.15 seconds on the 20m sprint, but seems to glide rather than burst around the ground. A long-term prospect for a club who might be looking for that taller midfielder with smarts.