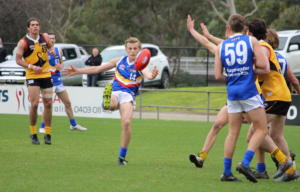 A CLASSY forward with line-breaking speed and great decision making, Gawel is not a huge accumulator of the football, but showed his upside through his raw talent with the Ranges. A medium forward with a 2.93-second 20m sprint, Gawel still has to build his endurance if he is to move into the midfield (20.5 yo-yo test). His draftable traits catch the eye and is one to watch. Among his eye-catching traits is his ability to find space and create in the forward half, overcoming a mid-season injury to win back a spot for the Ranges in the second half of the season. He does need to sharpen up his disposal consistency at times, averaging 48.1 per cent by foot and 61.8 per cent by hand, but he showed that at his best he is utilised well as a speedy forward with good size and more strength than most. Prior to injury, Gawel averaged 15.3 disposals and booted four goals in his opening three games, before having a slower return, playing further up the ground to boot just two goals from seven disposals in six games. Overall his athletic traits make him an interesting and unique prospect in terms of medium forwards.