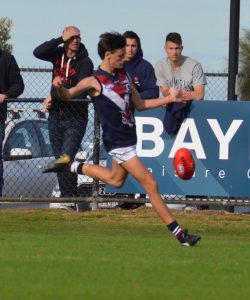 DRAFT ANALYSIS: “Carrigan is a tall wingman who moves well and has plenty of upside and development left.” – Ed Pascoe

It might have come as a surprise to Lachlan Carrigan to be selected for this year’s National Combine considering he wasn’t included in the 2020 AFL Academy, but in the little he got to show before this season started he has put himself firmly into draft calculations. The smooth moving wingman was a standout at preseason testing, running an impressive 21.6 in the yo-yo test and an elite time in the 20m sprint with 2.91 seconds. His football also did some talking with a strong game against Oakleigh in the preseason trial fixtures. Carrigan only played a handful of games last year but sticking out was a brilliant game against Tasmania, in which the Sandringham youngster finished with 22 disposals and seven marks while spending time on the wing and at half-forward.

Carrigan’s upside is enormous. With a late birthday in December he is set to turn 18 on draft day (December 9) and his physical growth has been rapid. Measuring at 184cm last year, he shot up to 189cm at the start of this year and has added a further 2cm at the most recent combine to now stand at an impressive 191cm. There is potential to grow even more with height running in the family, too. Carrigan also has a light frame which he will add to in the coming years and he has worked hard to build that strength up in isolation, adding 5kg to his frame since preseason testing was conducted.

Carrigan moulds his game on Hugh McCluggage and it’s not hard to see why. Carrigan spends most of his time on the wing and he is certainly a smooth mover in traffic, while also showing he has smart positioning around stoppages and in transition. Adding that scoreboard impact is certainly something to work on but he does well to set up others with his clean hands at ground level and ability to pick the right option and stay composed under pressure. His kicking is solid on his favoured left foot and he often knows when to keep the ball low or give it air.

As touched on earlier, Carrigan’s athleticism really caught the eye at preseason testing with elite scores in the 20m and endurance tests to go with some more than modest scores in the vertical leap and agility tests. With these results, it shows Carrigan is a very well-rounded athlete and that could only help his versatility to play different roles at AFL level. With that height and athleticism he could easily spend time at half-back if needed and with more size put on his frame he would also make a great midfielder in the Scott Pendlebury mould, especially with that composure and left foot.

Although athletic, Carrigan doesn’t always bring that out in his play style. As composed and skilful as he is, he doesn’t particularly use his leap in marking contests, or sprint with the ball with that elite speed, and despite the great endurance he only averaged 11 disposals last year with only the one outlier game when he managed 22 disposals. Carrigan’s biggest hurdle this year would have been improving that consistency and getting as much out of his athleticism as possible but that does come with further development and game time.

With his light frame, Carrigan won’t be expected to play AFL football early as its very tough going in modern football coming against mature, big-bodied wingman like Sam Menegola (89kg) and Mitch Duncan (88kg) so he will likely spend time in the reserves building up his body and further developing consistency in his game.

There is a lot of potential with Carrigan with his rapid growth since last year. He hasn’t turned 18 yet so on one side it will be hard to pass on his potential, but on the other hand because he is a late developer and with barely any football played for him this year, clubs could let him gain a full year of playing before pulling the trigger. It could take one club to pounce early on Carrigan, but it’s more likely he goes late. Still, he should take a lot of confidence from the fact clubs wanted to see him at the combine despite not being selected for the AFL Academy going into the year.