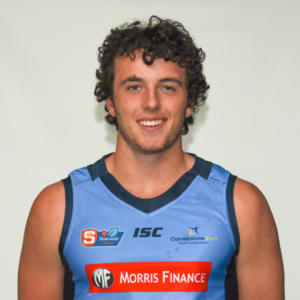 MISSING out on being drafted last year, Sturt’s Lachlan Burrows received an extra year of development in the SANFL Reserves competition, where he rotated in various key position roles across the ground to good effect. Averaging just 6.7 disposals per game, Burrows is one of the more mobile rucks going around, with an 8.3-second agility test and 3.08-second 20m sprint proving his athletic worth. While he can cover the ground well in that sense, Burrows still needs to build his endurance in order to have a greater output and better stamp his authority in the air. His work when in disposal is quite sound for a big man though, going at 63 per cent disposal efficiency this year at Reserves level. Overlooked talls are often brought into the AFL after a base of solid form at state level, but Burrows’ mobility could see a club roll the dice on him.