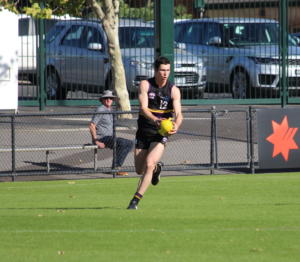 DRAFT ANALYSIS: "A natural-born leader with elite kicking abilities, Ash makes the right decisions with ball-in-hand and is a damaging player coming off half-back."

AFTER an impressive bottom-age year, Ash was highly touted coming into the 2019 season, and he did not disappoint. The skilful rebounding defender was a consistent performer across the NAB League season for Murray, averaging more than 23 disposals per game. After being elected co-captain of the Bushrangers with teammate Cam Wilson, Ash would go on to co-captain the Vic Country squad throughout the AFL Under-18 National Championships, indicating that he is looked up to by his fellow teammates and admired by his coaching staff. Ash is the ideal footballer for an AFL team searching for a line-breaking defender who can consistently hit targets by foot with terrific vision and decision making. His test results at the NAB AFL Combine were also eye-catching, registering a 21.4 yo-yo test (finishing sixth overall) and a sub-three second 20-metre sprint. Similar to fellow half-back Hayden Young, an area of improvement for Ash is further midfield development, particularly with a focus on the contested ball aspect of the game.

Like he did in 2019, Ash played the majority of the year in back half for Murray Bushrangers but also spent plenty of time through the midfield and even up forward, where he had an impact, booting five goals for the season. His biggest strengths are his speed, agility, and foot skills. Ash has the ability to open up the game with just one kick, which he displayed throughout the season when he executed some superb kicks into the middle of the ground. He is definitely not afraid to take the game on and is always trying to find a way where he can just tuck the ball under his arm and then his agility to manoeuvre his way around the opposition. During the AFL Under-18 National Championships, Ash was able to pull off some miraculous kicks by foot that not many in this draft class would be able to execute. He has excellent penetration with his kicks and what makes Ash an even more enticing prospect, is that he’s just as good on his non-preferred foot, an attribute that boosts his chances of developing into an elite footballer at the next level.

Although, Ash is close to being described as an all-around footballer, the penetrating half-back can further work on his midfield craft, particularly on the inside. The signs he showed during the NAB League season indicate that he definitely has the potential to move into the midfield at the next level, but most likely on the outside of the contest where he can do the most damage. If he can add that inside element to his game – he has the athletic traits to do so – then he becomes a more damaging player who can run through multiple roles. In saying that, like many of the top prospects in the draft, his traits are more than enough for him to be a permanent outside midfielder, and his improvements are more areas for him to just become an even better player, rather than ones that will hinder him going forward.

As it nears the 2019 National AFL Draft, Ash is firming as top 10 pick or potentially, top five. After a consistent season at the Murray Bushrangers and for Vic Country, his draft stocks have only risen as the year has progressed. He would be best suited at an AFL club in need of an exciting, running defender who is elite on both sides of the body and most importantly, some very impressive leadership qualities that are very hard to come by from such a young player.