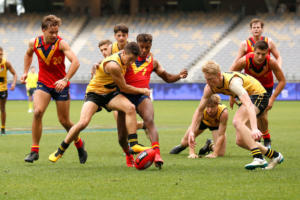 DRAFT ANALYSIS: "An electric player capable of almost anything on the filed either in the air, or around goal, the player with the most X factor in the draft."

COMING from a strong football family, Kysaiah “Kossie” Pickett is nephew of Port Adelaide/North Melbourne Byron Pickett, and is a player that can do the unexpected and brilliant on the field. ‘Kossie’ has balanced all his playing commitments this year with 1st 18 football at Prince Alfred College (PAC), winning SA school competition, Reserves and a League Debut at Eagles as well as SA Under 18 side at the National Championships. Pickett at his best this year has turned games by pure patches of brilliance and he knows where the goals are. He was rewarded with a SANFL League debut in Round 2, after a best-on-ground six-goal haul the week before in the Reserves. Every part of his game is at high pace and intensity, either high leaping marks, goals, or forward tackles; his pace and athleticism are eye-catching and no-one has these attributes to his level in this years crop of players. With his PAC football being a priority, Pickett only played a smaller number of games at SANFL level and finished with 15 goals from nine games. He did manage to average three tackles per game at Reserves and League level which was indicative of his impact on games. His season certainly had some highlights and every game he was in felt like something special could happen. Only bursts of his talent were shown really this year, but with consistency and opportunity he could become a true game breaker.

Pickett is a natural pressure forward who can move into the midfield, but would sometimes find it tougher against the bigger bodied midfielders. When the ball is in his area, it is clear he will hunt and harass defenders and has the makings of a pressure forward with elite speed. He has a natural ability around goal, and he will fly for any mark even as undersized, simply because he leap is so good. Pickett’s National Draft Combine results indicate how explosive he is with a 20m sprint of three-seconds, plus a huge running jump of 83cm which factoring in his height of 170cm, is elite. Although his agility test was on the lower side of 8.6, on the field Pickett is hard to tackle and chase. Although his possession average for the season was only 12 possessions a game, every time Pickett has the ball forward of centre something would happen. He gets value for his possessions, but his challenge to move ahead with his game is consistency which would make him a difficult match-up.

As a smaller size, an outside midfield role is something that Pickett could develop into with some work on his endurance to help make him even more versatile. He can tend to float in and out of games in terms of his impact – which again speaks to endurance – but he still maintains a high intensity in the way he plays. He is good user of the ball and generally makes good decisions, so adding that extra element to his game once in an AFL system would add to how dangerous a player he can be. Pickett is the prototype modern pressure forward, with speed and ability to tackle, as well as having an X-factor with the ball to do the spectacular and no doubt make him a crowd and team favourite. Mark of the Year is a possibility for Pickett one day, but although he can do those incredible things other players cannot, fundamentally his game is based around pressure which is a great attribute for him. Naturally similar players in the modern game that Pickett could develop similar traits are the current forward pressure players like Daniel Rioli, but Pickett is electric around goal and a player like Michael Walters would be something he could aim to become with some midfield time as he develops. Clubs will be excited with what they get with Pickett, as will supporters in the future.