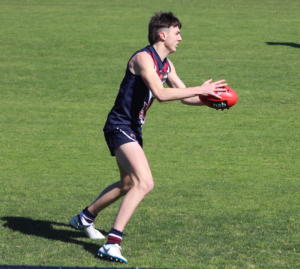 UNLIKE many of his teammates, Yorke did not have to contend with school football commitments during the NAB League season – apart from winning the Herald Sun Shield with St Bede’s. He started the year in great form, booting 12 goals in his first five NAB League games – headlined by a five-goal haul against Gippsland. Yorke’s form in front of goal continued but was hardly quite replicated late in the year, with some yips in front of goal coming into play before a drop in form heading into finals. He has some nice forward traits including his leading patterns, marking and goal sense, but has to work on his slightly inconsistent goal kicking accuracy as well as his speed (3.22-second 20m sprint). A dangerous option deep inside 50, Yorke would also have to develop his game to work up the ground and use his marking there given he is slightly undersized for a key position player at the next level.