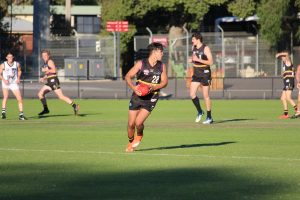 Kyle Clarke’s season came to an unfortunate end before he could put in a big last month, with a serious knee injury ending his year. He was also unable to test at the Rookie Me Combine, but throughout the TAC Cup season, recruiters would have seen what he is capable of in games. He has an insatiable desire to hunt the football and his opponents, and has the skills and athleticism to win the ball then burst away, evading his opposition. He has played both midfield and forward, and has the disposal to be able to play a range of roles on the field, with his 55.1 per cent disposal efficiency not indicative of his disposal by foot. The reason for the lower efficiency is sometimes he can throw the ball on the boot under pressure, rather than directly cough up to the opposition, with his kick clanger percentage, a low 11 per cent. He is just the 174cm and 72kg, so he is a lighter body who will need to add strength to his frame, and recover from his injury, but he seems like the type of player that could play as a small forward at the elite level. He has plenty of great traits both offensive and defensive and while he even expressed that his chances of being drafted were diminished due to injury, expect him to bounce back and could be a mature ager to watch in the years to come.