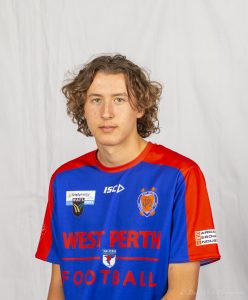 DRAFT ANALYSIS: “Johnson is an athletic tall defender who intercepts well and loves to take the game on with attacking runs on the rebound.” – Michael Alvaro

2020 has not been overly ideal for Kellen Johnson, but the West Perth product managed to make the most of his on-field opportunities as a top-ager. Johnson is a highly athletic, yet raw key defender with points of difference; not only able to intercept well, but arguably even more impactful with his willingness to run-and-carry out of the back half. The 18-year-old had only just recovered from a back issue when he sustained a long-term hand injury in Round 1 of the WAFL Colts season, putting him out of action until Round 8. He returned to the Falcons’ fold just in time for finals and finally got to team up in defence alongside highly fancied draft hopeful, Heath Chapman. Solid outings in the Western Australia Under 18 All-Stars fixtures also allowed Johnson to show his wares, doing everything he could to push his case before draft day. He was a standout National Combine tester too, achieving top 10 results across four categories after earning a late call-up to the event.

Much like his teammate Heath Chapman, Johnson is an attacking defender of sorts but can also fulfil his primary duties when required. Most of the 190cm prospect’s best plays show him dashing out of the back half with dare, using his notable speed to cover ground quickly and chain possessions further afield. While his endurance base has not proven overly great testing-wise, Johnson is able to repeat run on these occasions and show a very attacking mindset, as he carries and works to receive the ball right up to the forward 50 arc. This sometimes sees him placed out of position should a turnover occur, though the depth on his rebounding usually allows enough time for him to work back. It must be said, his endurance results of 20.8 on the yo-yo test in preseason and a 2km time trial run of six minutes, 57 seconds at the National Combine are perhaps indicative of the impact of Johnson’s injuries throughout the year.

In possession, Johnson is definitely a kick-first kind of player. During this year’s WAFL Colts season, 35 of his total 41 disposals were delivered via foot, equating to an 85 per cent kick rate. This makes his ability to chain possessions all the more impressive, as it takes far more effort and speed to receive back off your own kick, rather than a handball. In terms of his efficiency, Johnson is usually solid but can sometimes put a touch too much air on his kicks at full flight, which is a skill that can be easily sharpened. It plays into his overall rawness, adding to the factor of a lack of strength. At 190cm and 77kg, Johnson still has plenty of filling out to do and will more likely play as a third-up interceptor or running half-back at AFL level. While he is a capable key defender at Colts level, his athletic attributes lend more to other roles and a lack of strength would make it difficult when wrestling with overtly physical key forwards.

In terms of his overall defensive game, Johnson is quite sound. While he is a lean type who may not fare as well in one-on-one tussles, he still manages to shut down his direct opponents with terrific closing speed and reading of the play. Johnson usually knows when to peel off and intercept mark, but also gets back to spoil when required and is capable of clamping down with tackles. He averaged 3.3 marks and tackles per his four outings this season, showcasing that balance of decision making between the offensive and defensive acts. Given he does not quite have the body type of a key defender, but also has not shown the output of a true half-back (average 10.3 disposals), it will be interesting to see where AFL recruiters see Johnson fitting into their sides. Should he improve that output and showcase his best form more regularly, he could become an incredibly versatile and damaging defender.

Having been included in this year’s AFL Academy intake and eventually earned a National Combine invite, there is obviously some interest in Johnson at the next level. Some clubs may want to see how he fares across a full season, but others could pounce on his potential. The defender’s athleticism and two-way impact from the back half make him an enticing prospect, and one which fans will enjoy seeing glimpses of. He is elite in terms of a vertical leap and agility, but may require some development over a few preseasons to build strength and regain that endurance base to be ready for senior football. These factors make him a late-round or rookie chance.