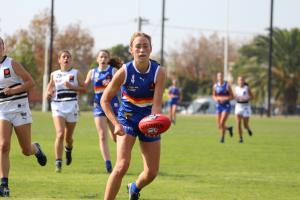 Gifted with superb athleticism, Keeley Sherar became a permanent and crucial part of the Eastern Ranges midfield, with her work around stoppages and ball winning around the ground impressive.

Keeley Sherar was one of the surprise packets of the NAB League season, stepping up in the Eastern midfield to good effect. Sherar provided a consistent ball winning option, never dropping below 10 disposals during the campaign, being one of the main drivers of the footy going forward.

Sherar’s specialty became her clearance winning, where she utilised her top level burst speed and side step to beat opponents to the ball and get around oncoming pressure and kick as long as she could forward. Whilst she did favour kicking when disposing the ball through the year, her hands in tight were particularly impressive and will be a dangerous asset at the next level.

Was played largely on the half-forward flank during the NAB AFLW U19 Championships with Vic Metro, averaging the 8.5 disposals, two marks and four tackles per game, she showed potential to play as a high half forward with some more time to learn the role, pushing well up the ground to present as a switch option and send the ball inside 50. After the Eastern Ranges bowed out in the Preliminary final, Sherar went on to represent Hawthorn in the VFLW for their final four matches of the season.

As she progresses in her football career, Sherar will look to improve her kicking execution in particular, where at times she looked rushed and confused under pressure, but when she had time to think about her kicking the result was generally good, able to get penetration and distance behind her kicks, making her clearance winning all the more dangerous. With consistency in her kicking execution, it could also aid any possible position switch, combining with her marking, handballing and ground ball winning to make her a very dangerous all rounder.

“The Eastern Ranges talent was one who really stepped up in 2021 after only managing the one game in the shortened season last year, so not much was known about what she was capable of. Sherar not only stepped up to be a prime ball-mover for the Ranges – particularly in the absence of Olivia Meagher in the second half of the season and Tarni Brown after she was drafted last year – but earned a Vic Metro jumper for her troubles. Averaging 14.8 disposals, 3.4 inside 50s and 4.8 tackles, Sherar is a forward runner with great tackling skills and extraction out of the contest, can move the ball quickly and get it inside 50 well to set up scoring opportunities. One to watch who can add a point of difference to a midfield.” – Peter Williams via “Draft Central AFLW Draft Power Rankings – Victoria Pool: June 2021”

“There were plenty of players who came on incredibly well in 2021 compared to their 2020 seasons, and after only managing the one game for Eastern last year, Sherar really stepped up and became a huge feature for the Ranges midfield. She averaged the 14.8 disposals, 2.2 marks and 4.8 tackles this year, and just made things happen with ball-in-hand. A creative forward half player who was best suited to winning the ball at the contest and putting it inside 50 – something she did an average of 3.4 times a game – Sherar was trusted with ball-in-hand and set up scoring opportunities for her teammates. In a side with plenty of consistent performers, Sherar certainly did her draft chances no harm with a call-up to Vic Metro and not missing a beat in the NAB League.” – Peter Williams via “Ones to Watch: AFLW Draft eligible surprise packets”

“Another of Eastern’s Vic Metro Under 19 representatives, Sherar quickly stamped herself as one to monitor with eye-catching moments in midfield. While she did not accumulate over 20 possessions in any game this season, Sherar also did not drop below 10 as a permanent fixture in the Ranges’ engine room. Her burst from congestion and ability to set Eastern on the front foot was great to watch, but she was another to be squeezed out of a very strong Metro midfield.” – Michael Alvaro via “2021 NAB League Girls team review: Eastern Ranges”

“A few factors have set Sherar out as a prospect for this season, with her burst of speed and ability to find the ball two of them. She managed to show those off once again in her last NAB League game for the season. What was also impressive from Sherar was the fact she was an aerial threat around the ground, showing off an impressive leap when required. While she seems to favour kicking, her hands in close are really impressive, with the ability to spot teammates through traffic and find a way to get it to them.” – Declan Reeve via “Top Performers: 2021 NAB League Girls – Preliminary Finals”