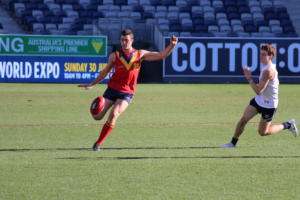 DRAFT ANALYSIS: "Karl Finlay is a potent defensive weapon, with the intercept marking ability to create real drive out of the backline."

KARL Finlay was one of the best rebounding defenders in the National Champs and has really owned the backline in all games this year. Having been South Australia’s best player at the Under-16 championships in 2017, this year he was the only player to be named in the best for each game of the Under-18 championships. Combining with Gould and Hilder they were a formidable defensive unit, and it was Finlay’s ability as a sweeper to read the flight of the ball and then leave his man as required to mark the ball that was on show at all levels of football. Never flustered, Finlay also commanded leadership as Captain of Football and College Prefect for Prince Alfred College (PAC).

At the National Draft Combine, Finlay showed his athleticism in a number of tests including a 6:32 2km time trial, as well as 20.7 on the Yo-yo, which while it could improve, is solid for a taller player. For South Australia in the National Under-18 Championships, Finlay took a number of intercept marks or spoils, was rarely beaten one-on-one, and showed he had the game sense to know when to stay on his opponent or leave to provide some team defence. At school level, he lead PAC to the State Championship and was mammoth in defence and would have had many games with 20-plus marks such was his ability to know where the ball was going. Finlay has drawn comparisons with players such as Jeremy McGovern and Robbie Tarrant for his intercept ability.

For all his upside without the ball, there are still some areas he can tidy up to improve his game with it. While finishing with a kicking efficiency of 76.2 per cent from his three games in the SANFL Under 18s for North Adelaide, of his five missed kicks, four of them were clangers. For a key defender this can be costly and combined with decision making, it is an area that can be cleaned up. The other area Finlay can build on his his ground ball work, which is not surprising for a taller player, particularly one who is so strong aerially. With just four tackles across five games in three SANFL levels, the ground work can still improve. If he can impact at ground level like he does in the air, he becomes a multi-faceted defender. However, we are confident he can improve this area of his game because of his surprisingly good agility. At the National Draft Combine, Finlay recorded a time of 8.476 seconds which was the third highest of any combine invitee, and only Harrison Jones’ was taller with a better agility time. It means that Finlay has the potential to be quite an agile defender, and be as strong at ground level as he is in the air. Overall, while he does have these areas to improve on, Finlay is one of the better interceptors on offer in this year’s AFL Draft, and expect him to find a home somewhere from the third round onwards.