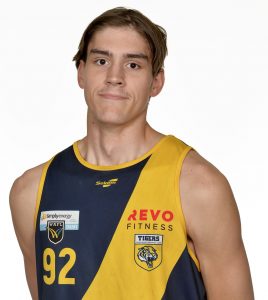 DRAFT ANALYSIS: “Lane is a fast-developing ruck prospect with terrific tap craft and the competitiveness to impact around the ground.” – Michael Alvaro

Kalin Lane was a relative unknown among the most recent West Australian AFL Academy hub intake, especially after managing just one WAFL Colts appearance last year. Since, he bookended his 2020 season brilliantly to become one of the premier ruck options available in this year’s draft. The Denmark-Walpole native is a 2001-birth, technically placing him in the over-age category, though he is only set to turn 19 four days before the National Draft (December 9). The 204cm bigman has showcased strong ruck craft and an appetite for competing around the ground, contributing to his steep rate of development and overall upside. Across a full Colts campaign this year, Lane lived up to his billing and played a key part in Claremont’s run to the Grand Final. His form was also enough to warrant selection in the WA Under All-Stars fixtures, where he only continued his upward trend and consolidated his place on the AFL Draft radar.

At the crux of Lane’s overall game is his ruck craft, the key strength which remains consistent as he adds other strings to his bow. After the opening WAFL Colts round this year, Lane did not drop below 20 hit-outs for the remainder of the season, even if his production elsewhere wavered at times. He finished with an average of 24.9 in this area, even notching highs of 39 and 32 come finals time. While not overly agile or explosive on the eye, Lane often has the obvious height and reach advantage over his ruck opponents, which he uses well to get first touch on the ball.

It is not just a matter of claiming the tap though, as Lane’s directional craft is exceptional for such a raw talent. He formed a particularly damaging partnership with small midfielder Joel Western with that kind of work, cleverly turning his body to protect the drop zone as well as the intended receiver. He is also quite impartial to a double-handed tap and likes to work to the front of ruck contests, where he can best control the direction of play.

What may set Lane apart in future is his ability and willingness to follow up those initial acts in the ruck. It is no surprise that a player of his 204cm and 96kg build holds great presence at stoppages, though not all rucks are able to compete at ground level. Lane does just that with his ability to win clearances and lay crunching tackles, showcasing a high work-rate and competitive edge once the ball hits the deck. Again, he is not particularly quick but has a good crack once his number is called and when the ball or carrier enters his area.

Being so adept in extending his impact past the initial ruck battle, Lane is working towards becoming a player who dominates in all parts of the ground. He was able to pull down some solid contested marks throughout the season, using his height/reach to advantage and proving difficult to spoil at full stretch due to his sheer size. Lane also positioned well behind the ball or down the line to provide both a roadblock and a target, which will only aid his ability to stay in games for long periods of time.

Building a bed of consistency in terms of output is often what rucks look for as they develop, and Lane has plenty of that left in him should he get to an elite environment. He was tried up forward in the second All-Stars game and managed to find the goals, so improving that scoreboard impact will only aid his cause. Sharpening his skills will also be important, though Lane often plays within his limits in dishing hand-offs or booting long via foot. He has also filled out nicely to 96kg and building muscle will be important to become more explosive in ruck and marking contests, while also providing the strength required to compete with AFL-level rucks.

It will be interesting to see whether clubs opt to bring in developing key position prospects this year given a lack of exposure for some and impending cuts to list sizes. A club which is in need of a third ruck or can afford to develop one over time may be keen on Lane, who has come on strongly over the last year. There is still plenty of room for improvement, though the West Australian has shown a good rate of development and should be able to adjust well to competing against mature bodies. He could also be a prospect which clubs will want to observe over another full season given his rawness, but there will be plenty of upcoming opportunities to pounce should he miss out on being drafted in 2020, nonetheless.