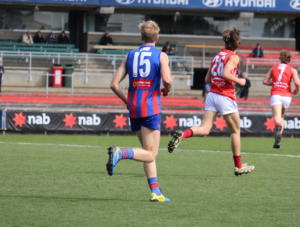 THE Oakleigh utility spent most of his year at Caulfield Grammar, but returned to the Oakleigh side in the lead-up to finals where he found a role as a running defender and outside midfielder. His NAB League return game was in the hotly contested qualifying final against Gippsland, but his best work really came to the fore in the preliminary and grand finals, notching a combined 51 disposals and 19 marks to really prove his credentials as a state combine invitee. He has clean hands in the air or at ground level, is a nice kick – above his 59 per cent efficiency – and has the ability to cover the ground well along the line to both intercept and rebound. To improve, Schreiber will look to impact the scoreboard should he continue to work up the field, and build his confidence to help his decision making across half-back. That looks to be his best position, with Schreiber’s apt reading of the play and versatile style suiting it well.