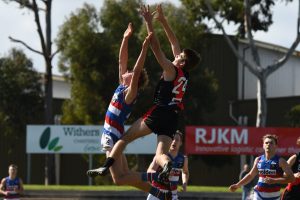 West Adelaide product, Jye Sinderberry has overcome injuries and the wider struggles attached to season 2020 to impact across all three SANFL grades as a top-ager. The medium defender has played down back throughout his junior footballing career, and shot onto the draft radar after earning All Australian honours in the 2018 Under 16 National Championships, a carnival won by South Australia. He continued his upward trend by breaking through for six Westies Reserves outings in 2019, before returning to prominence in the back-end of this season. After consecutive digs in the Under 18s, Sinderberry made the senior step up once again with two Reserves digs and a final round League debut. Despite boasting a smaller recent sample size compared to other top-age Croweaters, the 18-year-old still managed to prove his worth down back, up on a wing, and even through midfield.

Having primarily developed through the pathways as a defender, most of Sinderberry’s most notable traits suit a player employed in that third of the ground. In his Under 18s Round 9 return game, Sinderberry showcased as much with his sound reading of the play and intercept marking ability. With plenty to do in the West Adelaide defence, a cool head down back is both what the youngster provided, and what his side required. His recent National Combine results in each vertical jump parameter further highlight that aerial prowess, a key part of his game.

Not only does Sinderberry excel aerially, but his courage and hunger to compete also transfer to his work at ground level. The 189cm prospect is well-built and puts his frame over the ball when necessary, albeit if he tends to go to ground a little easily at times. His usually quick and clean skills via hand allow fluent ball movement on the exit, and is something Sinderberry was able to showcase with more time up the ground in 2020.

Part of his move further afield not only comes down to his size, but also his strong drive and running capacity. Sinderberry took out the South Australian 2km time trial with an effort of 6:28, and it translates to his on-field efforts at times when allowed time and space in transition. He is also capable of launching the ball forward via foot, with that booming boot also able to hit targets in the short range, adding to Sinderberry’s reliability and rebound value.

On face value, Sinderberry’s versatility comes down to his ability to play either in defence, on the wing, or at the centre bounces. But furthermore, the Wesites product is also versatile in terms of his defensive skillset. While the attacking factor off half-back is often what initially catches the eye, Sinderberry is also capable of playing a lockdown role, credit to his competitiveness. Fellow draft prospect Kaine Baldwin is quoted as saying Sinderberry was his toughest opponent, which goes to show he can play a good range of roles and remains accountable.

While able to replicate the centre half-back role at Under 18s, Sinderberry will not be able to do so as easily at the next level. Given his high-marking style and lack of real explosive speed, it was not entirely surprising to see Sinderberry tried further afield and released of his primary defensive duties. He seems keen on developing into a pure half-back, which would obviously come naturally to him, but a key defensive post seems unlikely. That lack of real speed could also hurt him in midfield, though his running capacity may make up for it.

The competition for spots looks like being a tight one after around the 35-40 range, with Sinderberry just outside that mark in our eyes. Should a club see value in his competitive nature, senior experience, and versatility, they could show faith in taking Sinderberry with a late pick. Given his season was injury-interrupted, the youngster could also be one to remain on the radar at state league level, with the scope to transform himself into a tall midfielder or wingman in time. Even as a defender, his well-rounded game and intercept/rebound quality may attract suitors.