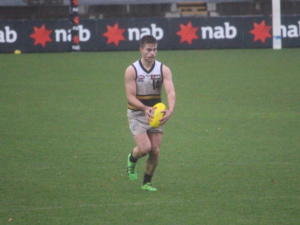 THE Murray Bushrangers mid/forward has spent considerable time in the midfield this season, playing a different role to his half-forward one in his bottom-age year. Chalcraft was one of the biggest ball winners in the NAB League competition, unlucky to miss out on Vic Country selection due to a raft of talented smalls. He can hit the scoreboard and has great on-field agility to get around opponents. In season 2019, Chalcraft averaged 21.7 disposals, 3.0 marks, 5.6 clearances and 3.9 tackles whilst booting eight goals – two more than his bottom-age year where he spent more time forward. The next step for the small midfielder is to improve his strength in the air and build greater four quarter consistency because when he was running hot he could rack up the ball at will in quick patches, but just needs to do it more consistently throughout games. He still has room for growth and given he can play either midfield or forward, has the flexibility to fill a hole in either area.

DRAFT CENTRAL’S INTERVIEW WITH JYE CHALCRAFT AT THE ROOKIE ME DRAFT COMBINE: