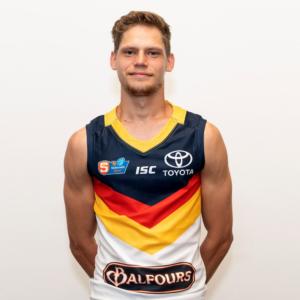 THE mature-age cousin of Carlton’s Sam Petrevski-Seton has stepped up in class this season after initially playing in the amateur leagues, representing Adelaide’s SANFL Reserves in two games. While still very raw with consistency and endurance to work on, Farrar has nice upside with great athletic traits such as his speed (2.9 seconds) and agility (8.18 seconds) shown off at the State Combine. He his coming up to the right age for mature prospects and is a good height to boot, but may have to have an extended impact at the state league level after having just six disposals in each of his SANFL outings. Farrer tackles well and can find the goals, offering excitement at the next level.