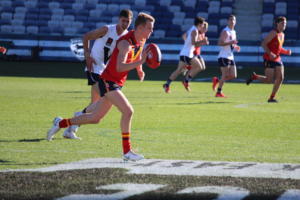 FOLLOWING a consistent top-aged season, South Australia’s Joshua Shute has presented himself as one of the better wingman in the draft pool. Throughout the mid-season National Championships, Shute was one of the shining lights for the Croweaters, consistently providing an option on the exterior of the midfield to average a strong 19.5 disposals and 8.8 marks. Also increasing his prospects was Shute’s ability to successfully transition to SANFL Reserves level with Sturt and continue to flash his class, often in a slightly modified role across half-back. In 14 Reserves games, he averaged 20 disposals at 85 per cent efficiency and 6.7 marks. Whilst he has been utilised primarily as an outside midfielder, Shute also possesses the capacity to be deployed at either end of the ground, due to his hard running and neat skillset. At 187cm, Shute is a nice size although he will be expected to gain several kg’s at the next level. Although likely restricted by his predominantly-outside role, question marks have centered around the Walkerville product’s inside game after posting a contested possession rate of 26.1 per cent in the Reserves. However there is little doubt the classic wingman’s skills and work rate will appeal to AFL clubs.

Inside game
Impact per possession

Sturt’s Josh Shute may not boast the eye-catching athletic traits often associated with wingers (3.07 second 20m sprint and 20.4 yo-yo level), however his class with ball in hand will more than likely ensure he joins an AFL team by November. Shute has a clean and precise right-foot kick which hits its intended target more often than not, as suggested by his 85 per cent disposal efficiency against many stronger bodies at reserves level. Shute’s regularly high mark numbers and ability to accumulate high disposal numbers on a consistent basis is a testament to his work rate but also his football smarts and ability to get into the right spaces and provide an outlet option. Particularly encouraging throughout the season was Shute’s ability to step up and perform admirably across a variety of levels for Sturt and South Australia. Throughout the season Shute displayed the precise foot skills and high work rate required of any winger at the highest level. Regardless of the opposition, Shute was a regular accumulator, seemingly always producing in excess of 18 disposals each weekend with several inside-50s to his name. Although he was unable to break into the battle hardened Double Blues senior side, Shute found the ball consistently in the Reserves and proved a class above Under 18s level. Shute is calm and composed in traffic and at 188cm, can also be deployed across half-back and half-forward. Shute has a promising set of strengths which suggest he could evolve into a handy utility at the next level.

Although Shute’s outside talents have been well pronounced, deficiencies with his inside game could see clubs pidgeon-hole him as an exclusively-outside talent. Traditionally, focusing upon adding muscle once in an AFL environment could result in an improved ability as an inside midfielder and this likely an area Shute will be expected to work on at the next level. Furthermore, having collected a large proportion of his disposals in the defensive half, Shute must also develop more attacking flair, particularly given his above average but not elite speed. Overall, Shute has some nice outside traits from which clubs can build upon, as well as some areas of improvement going forward to become a more balanced player.