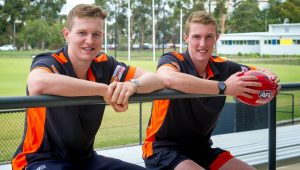 DRAFT ANALYSIS: “Green is a mobile utility who thrives aerially, helping him shape as the leading GWS Academy prospect this year.” – Michael Alvaro

Following in the footsteps of his brother, Tom, Josh Green looms as the top talent coming out of the GWS Giants Academy in 2020. While he cuts a similar figure to his elder sibling, the Canberran is a genuine utility at 192cm, able to play roles in key position posts at either end and even run through midfield. Green turned out for the Giants Academy four times last year, while also representing the NSW/ACT Under 17 Futures side against Vic Country. As a top-ager, he improved his standing with two excellent performances for the Giants in the Academy Series, arguably claiming best afield honours for his side in both outings. Having played in the 2019 Under 17 Futures All-Star showcase, Green also earned a National Combine invite to cap off his year.

Versatility is one of the top traits a draft prospect can have and as a genuine utility, Green ticks that box. He is a strong figure at 192cm/87kg, allowing him to adapt to the rigours of key position play and take on opponents who may measure up taller than him. Green’s aerial ability is largely made up of his marking prowess, with a decent vertical leap (71cm running at preseason testing), judgement of the ball in flight, and clean hands combining to make up that part of his game.

At centre half-back, Green uses those traits to cut across and intercept, while up forward he more often marks on the lead or in contested situations. His sometimes overlooked running capacity also aids such a style, with high-level endurance (21.6 yo-yo test score in preseason) and decent speed off the mark (3.075 seconds 20m sprint) allowing him to attend multiple contests. As much was evident in his first Academy Series outing, where he dominated the second half with a series of strong marks in soggy conditions.

That same running ability is something which has Green pegged as a potential big-bodied midfielder, somewhat in the mould of his older brother. His clean hands and overall mobility shape as terrific attributes which can transfer to midfield play, though Green’s craft in that position is something he can still improve on. Looking at his NAB League numbers from 2019, they are quite indicative of a key position player with averages of 10 disposals and 3.3 marks, but Green is the type of tall who can find a good amount of ball between the arcs.

Should he continue to really give the midfield a crack in future, Green can work on becoming a touch more agile and explosive from the contest. His speed does not rate too badly in testing, though he can take a little time to get going and break free from congestion. He is a mobile type across the ground, but in a similar vein, Green can improve his ground level work to cleanly extract and move the ball on at stoppages. But with a good amount of strings to his bow and a promising base to work off, Green could be a player to show a steep rate of development should he reach the elite level.

Green may have attracted some interest from AFL clubs outside of the Giants with his performances this year, especially in the Academy Series against the best of his NSW/ACT peers. He looms as a much more prospective talent when compared to his brother Tom, so could prove more of a value pick later in the draft for GWS. At season’s end, the Giants held four picks past 40, meaning they could cover any bid for Green in the National Draft, select him late, or allow him to slide into the Rookie Draft. Either way, the most straightforward conclusion is that he will remain in GWS colours come 2021, should he be granted an AFL opportunity.