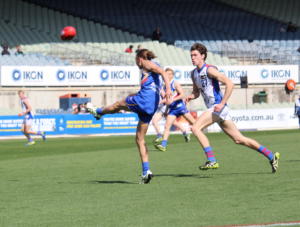 After a full bottom-age season which culminated in a strong NAB League Grand Final showing with the Eastern Ranges, Joshua Clarke became one of the standout small defenders among this year’s draft crop. The 182cm prospect has not since been able to build on last year’s 18-game campaign, but already put enough runs on the board to warrant continued interest from the next level. Clarke was part of the most recent Vic Metro Academy Hub intake and also earned a National Combine invite, serving as great reward for the promise he has shown thus far. The attack-minded half-back loves to take the game on and carve up opposition set-ups down the line, boasting great speed and a wicked left boot. He was all set to work on his defensive craft and consolidate his spot in the Vic Metro team as a top-ager, while becoming more of a leader for Eastern. While on-field opportunities have not presented, there is plenty of prior form to suggest Clarke has enough desirable attributes for a player of his style and standing.

Clarke is the kind of prospect whose areas of strength and improvement are respectively quite interconnected. Starting with his strengths, the Eastern Ranges product is a standout with his pace off half-back. While not overly explosive, Clarke flows nicely in full flight and has the agility to carve paths around opponents who stand in his way. Once he gets going, he can really burn down the line and gain serious meterage in quick time. This facet of his game was highlighted during the Vic Metro combine testing, as Clarke notched a time of 2.97 seconds in the 20-metre sprint. His agility test result of 8.24 seconds as a bottom-ager also stands up well. You can only imagine how much he could have improved on that this year had he had the chance to run it again.

The consecutive strengths listed as rebound, run-and-carry, and breaking lines are admittedly quite similar, but combine to describe the way in which Clarke can hurt the opposition in transition. His speed and agility play into the run-and-carry trait, as Clarke is able to carry the ball forward in bursts before unleashing on his favoured side. That kind of play makes him such a good rebounder, as he works to repel opposition attacks by initiating exactly that for his own side. While he is often an outside receiver who times his run-offs well, Clarke also positions to accumulate on the intercept and quickly clear his lines. In essence, he is a line-breaking player who can open the game up in an instant with his attacking mindset and smarts out of the back half.

At the end of most of Clarke’s passages comes a booming left-foot kick. It became a true feature of his game as he built the confidence to weaponise his disposal, even breaking forward to sink a few well-timed goals from range. Clarke’s efficiency may waver from time to time given a lot of his work is done on the move and in a rush, though much of it comes in an uncontested manner. That leans into Clarke’s improvements, starting with the contested game. Only 31 per cent of his possessions during 2019 were uncontested, indicative of very one-way work from half-back. He was able to put the ball both in and out of dangerous areas by penetrating either arc, but did so mostly from the outside.

During preseason, Clarke said he was working on his defensive acumen given the half-back role suited his offensive traits so well, and the basis of said role should largely come in his primary defensive duties. He is still quite small and lean at 182cm and 75kg, with strength a key area to work on in order to have a greater impact in contested situations. While you would not want to blanket his attacking drive and running capacity, adding that extra string to his bow would make him a more viable and accountable half-back option. He has put on four kilos since preseason, and nine since last year, so is certainly filling out nicely and may become more explosive. But at the end of the day, you know to expect far more going forward from Clarke, which may raise the question of whether he could potentially be freed up with a move to the wing in future.

Like many Victorians in this year’s pool, Clarke is a tricky prospect to place given his lack of exposure as a top-ager. Half-backs also tend to slide given ones without too many points of difference are generally deemed dime-a-dozen, and one more year for Clarke could have done wonders towards proving his worth. He has the speed and natural attacking acumen to succeed in that position, but the main queries will lie in his defensive game and whether can make a similar impact up on the wing. Clarke could well do so as he fills out and develops, and clubs may pounce on that potential from the third round, onwards. He may also be one who comes on strongly with another year in the age-extended NAB League competition, but clubs may want to put their own work into him instead and take him as a top-ager – especially given the lack of small defenders available.