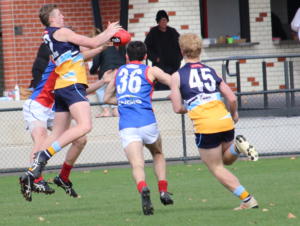 Josh Treacy is one of a number of Bendigo Pioneers hopes who showed plenty of promising signs in his bottom-age season last year. Standing at that in-between height of 194cm, Treacy predominantly played as a tall forward who occasionally pushed further up the ground. With a good offseason behind him, it was hoped he might play more as an inside midfielder, with his strength, penetrating kick, and size all features of his game. He has to build some greater endurance and on-field mobility, but he does have some nice traits that would appeal to AFL clubs.

Standing at 194cm and 94kg, Treacy has a strong body that is hard to move in one-on-one contests. He averaged 1.2 contested marks per game in the NAB League last year for the Pioneers, and was one of the more consistent players in his bottom-age season. He possesses a penetrating kick that helps him take set shots from long range, so is suited to the role of a leading forward. As a co-captain of the Pioneers for this year, Treacy leads by example on and off the field and is somewhat of a barometer with his attack on the football and ball carrier. Whilst it can occasionally get him into trouble, Treacy does not waiver in his courage both aerially and at ground level, which led him to an average of 2.8 tackles per game in 2019, a pretty impressive feat for a tall forward.

It is that aggression and ground level work that could see Treacy eventually develop into more of a big-bodied midfielder. He seldom spent time on-ball in 2019, and no doubt it was the logical move in 2020 had the NAB League season played out as hoped. The major knock on him as with most 194cm, 94kg players is his athleticism, which was another area he hoped to work on over the break. He is definitely more of a natural footballer with his ability to impact forward of centre, and as a whole his long-range kicking was fairly impressive, averaging above 60 per cent efficiency by foot, including 40.8 per cent being effective long kicks. He is not a liability with ball-in-hand and can clunk some big marks and convert some big goals, which is what you ask of your tall forwards.

Treacy is one who could have boosted his stocks in 2020 if he had been able to get on the park and spend time in the midfield, but he also would have had to improve his endurance. Whilst still a work in progress, he was determined to build on his 2019 with a consistent year having started 2019 with a low base that had picked up due to hard work. There are certainly traits that Treacy possesses which could lend themselves to an inside midfielder role, but if drafted then he will likely be tall forward to begin with as he continues to build that endurance base.

At this stage Treacy looms as more of a later selection in the AFL Draft, with some traits that are certainly a great foundation for a club to build upon. He was able to play a consistent bottom-age year last year and was a key player for the Pioneers. As a natural leader, Treacy is willing to take on any challenges thrown at him, and with his ground level defensive pressure and aerial ability, he can get it done in the air and at ground level. With more work on his athletic base, he could be a solid selection later in the draft.