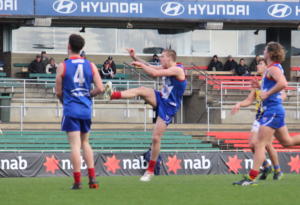 A big-bodied forward/ruck, Smith is undersized for a ruck at AFL level so will likely end up predominantly as a forward, who can pinch-hit in the ruck. Smith’s best traits are his contested marking and physicality, regularly booting goals and providing a presence inside 50. When he is not clunking marks, he is bringing the ball to ground, but has a lot of athletic areas to work on going forward. In recent times bigger-bodied athletes who do not have the athleticism have not been in vogue to be drafted unless they are a starting ruck, but Smith has more smarts than a lot and it shows in the way he impacts a contest. It is also worth noting Smith has cut back 5kg since the start of the year to be as fit as possible by years-end. He is never going to run a sub-three second 20m sprint, but he offers a contest and consistently hits the scoreboard with a strong presence in the air and at ground level.