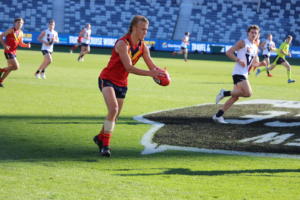 DRAFT ANALYSIS: "A fast leading, and dangerous forward who consistently hits the scoreboard."

THE season for Josh Morris is a reflection on the hard work he put in at start of season, and was the most effective SANFL Under-18 forward for most the year. He was rewarded with Reserves games at the Eagles in the second half of the year. His pure volume of goals made him a must selection in the South Australian (SA) Under-18 side for the National Championships. Morris is a dangerous player, with explosive speed off the mark, and a strong set of hands to go with a natural and effective set shot kicking ability. Across his games this season to finish with 44 goals has been a highlight and shows how much of a handful he is for any defender.

Morris has settled as a second key forward target and with his pace been rewarded with an excellent year in front of goals. He would often win ground ball and has a keen goal kicking sense either under pressure, or as a set shot. Ball in hand, he is settled in front of goal and reliable as shown with over 80 per cent accuracy for the year. Morris had incredible start to the Under-18 season with the Eagles, and was the dominant forward in the competition. At SA Under-18 level in the National Championships he did not get a heap of the ball and finished with four goals for the tournament, but his attributes were clear, and resulted in an invite to the National Draft Combine. Morris performed extremely well with a 20m sprint of sub-three seconds, plus impressive agility and vertical jump results. It is his burst of speed that is a stand out with an ability to put that gap on defenders early allowing him time to be damaging with the ball in the forward 50 arc. There are some attributes to keep improving with one being his tackle pressure – averaging just 1.1 tackles per game at SANFL Under 18s level. Although he has the pace, he needs to add this extra element to his game to keep him moving towards a high level. His season however with his large haul of goals meant that he often had more of the ball than his opponents, with both the Eagles Under-18 and Reserves sides making Grand Finals.

It is clear that Morris is a natural second or third tall forward option, as at 186cm he is undersized as a key position player. His leading and goal sense make him an important component of any side, and he be a difficult match up. He can take an overhead mark but he needs to continually stay involved in games and not allow his concentration to drift. This could be attributed to his endurance, with his yo-yo test at the National Draft Combine seeing him record a 20.4 which is below average, and with improved endurance, Morris could push into the midfield in future. As a forward he could at times have used his team mates more, but also this has to be balanced with his ability to hit the scoreboard. A similar style of player that Morris could look to model his game on is becoming a more mobile forward and pay higher up the ground, a similar playing style to Jack Riewoldt despite the height different. Morris has the running ability to develop into this type of player, whereas he was played predominately in the forward 50 for 2019.