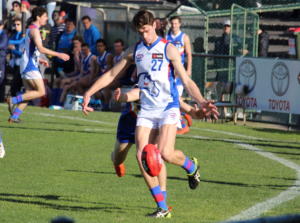 NO doubt the tallest midfielder available at 198cm, it can often be quite a different sight seeing the key position sized May roaming down a wing. Considering he still has to improve his endurance, May has predominantly played at half-back and on the wing, rebounding attacking forays and setting up plays for his side. He has a strong footy IQ and is just solid across the board, but will also look to improve his contested marking. May was a consistent feature in the Oakleigh side when much of the star-studded lineup was suiting up for Vic Metro or in school footy competitions, averaging 15.7 disposals across 17 games with a high of 28 touches in Round 6. That early-mid season patch was where May was at his best, stepping his game up when the Chargers needed a top-age leader. His unique size – having grown yet another three centimetres this year – and athleticism make him a rare breed, and one which could pique the interest of club recruiters as a true project player.

DRAFT CENTRAL’S INTERVIEW WITH JOSH MAY AT THE 2019 STATE DRAFT COMBINE: