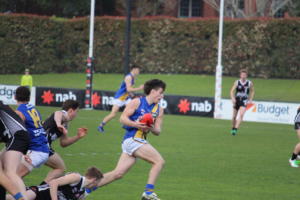 DRAFT ANALYSIS: "A superb athlete, Honey has a high hurt factor when he is up and about, and just needs to build his consistency both by foot and as a whole within matches to take his game to the next level."

ONE of the more talented players with high upside but still somewhat raw is Western Jets’ midfielder/forward Josh Honey. He is a player who can have a real impact on a game when he is up and going, winning the ball through the middle or in the attacking 50 and being a strong player on the inside. He is not a massive clearance winner, but still wins his fair share, often through his terrific athleticism to gain separation with a quick few steps and bomb it long inside 50. He can play either role well and has clean hands at ground level, with his defensive pressure – in particular his tackling – really impressive. The area Honey needs to further develop is his consistency, as he is often a player who has a greater impact when his team is up and about, and a barometer of sorts for his side. If he goes quiet or drops off, often his team does as well, which speaks to the spark he provides and the amount of drive that he can produce. If he can find that balance with his consistency both in his game and in his kicking, as well as find a way to have more of an impact for longer and win more of the football, then he is one who offers value as a mid-late draft selection.

If you are watching Honey for the first time, you immediately notice he has that presence that few do. His clean hands regardless of weather conditions, and his ability to get stuck in through his hunting of the ball and defensive pressure, and then his ability to go forward and kick goals as well. He is not a huge accumulator of the footy – averaging the 16.1 touches per game, though that includes his five-disposal final where he suffered concussion – it is what he can do with it that has the most impact. When up and going, Honey has a high hurt factor, taking risks both with ball-in-hand and kicking long inside 50 to try and create scoring opportunities for his teammates. When he is having a down game, Honey can often rush his kicks and not have the same impact as when he is up and going, which is why limiting the gap between his best and worst is important going forward. His versatility allows him to play anywhere in the forward half, with a half-forward resting role giving him time to catch his breath before going back into the midfield again. In wet conditions he is usually a one-touch player who stands out from the rest with his ability to pick up the ball like it is a hot, sticky day. This allows him to have extra time up his sleeve because he is not fumbling around trying to take possession. As a kick-first midfielder, Honey is always looking to put ball to boot – 65 per cent of his disposals are kicks – and that will always be more damaging in the forward half, but making sure each kick is impactful is important.

Honey has really developed his midfield craft this season after predominantly being that medium forward in his bottom-age year. Last year he booted 14 goals from 18 games, and despite moving into the midfield this year, Honey has still found a way to boot 12 goals from 14 games. The reason for this, and the other strength of his is his overall athleticism. At the NAB League Fitness Testing Day pre-season, Honey recorded a 2.97-second 20-metre sprint, a 8.10-second agility test and a 75cm running vertical leap in one of the better overall testers on the day. So while we spoke about his onfield footballing ability, what allows Honey to have such an impact around stoppages and up forward is that athleticism. He has that breakaway speed over the first few steps, that ability to weave around opponents and that genuine danger of beating most players in the air or at ground level. It is also why he takes the game on with a high-risk, high-reward game style. Any player that has that sort of athletic capability will make recruiters sit up and take notice, and with his clean hands, hurt factor and willingness to lay tackles – he laid six or more tackles in seven of his 14 matches – he is no doubt one that clubs will be tracking as a great value selection from the middle of the draft. He has the craft to surprise some and perhaps go earlier than expected, but whichever club takes him will have a great raw base to work with and just iron out those improvements going forward to have an impact at the elite level.