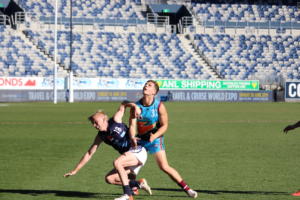 A TALENTED small forward who sizes up the goals and can hit the scoreboard regularly. He has a high footy IQ, but Gore’s development will be about broadening his versatility in the future. Gore is efficient in front of goal, only needing a few opportunities to make an impact on the game. He featured for Gold Coast in the NEAFL to good effect and could benefit from their recent draft concessions. At the State Draft Combine, Gore recorded 3.09 seconds on the 20m sprint which is not overly impressive compared to other small forwards, though it does not impact him as much in the way he plays with his pressure game and smarts to gain separation on the lead. While consistency is his biggest improvement needed, Gore has the capability of slotting multiple goals in games and is another to watch in the future to see how he develops over time.