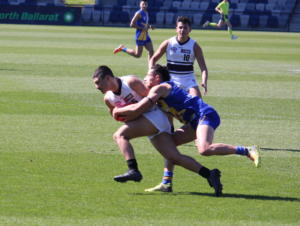 NOT many players have put in the body of work that the uncompromising small forward/midfielder has in 2018-19. A Knights’ best and fairest winner last year and runner-up this year, D’Intinosante finished second overall in the competition goalkicking and regularly added scoreboard and defensive pressure with a great goal sense. He is not an athlete, but a traditional footballer with high talent and admirable work ethic. While his midfield credentials were proven early in the year with a pair of 30-disposal efforts, D’Intinosante’s role at the next level will likely be that of a small forward – and he is more than capable of kicking big bags of goals with 21 goals in the last six NAB League rounds. He deserves a chance on talent and output, but could benefit from time in a state system to hone his athletic base and role – much like Ben Cavarra and Michael Gibbons in recent times. As a whole, D’Intinosante showed that despite having lower athletic traits, he can still impact a game in multiple ways with good strength and footy IQ.