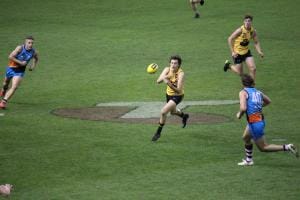 DRAFT ANALYSIS: "A composed medium defender who reads the play brilliantly and is an excellent distributor."

Jordan Clark first burst onto the scene as an elite sportsperson, when he took a hat-trick playing for the Australian Under 16s Cricket team in 2017. Since then he has made the transition into an exceptional attacking half-back flanker for Claremont, Guildford Grammar and the Western Australia Under 18s State Academy. He took out the Western Australia Under 18s Most Valuable Player (MVP) Award and gained All-Australian selection after averaging 20 possessions, six rebounding 50s, three marks, three tackles and three inside 50s across four games in the National Under 18 . Championships. He also played WAFL League football for Claremont, averaging 15 possessions, five marks and three tackles across five games. There are plenty of strings to Clark’s bow, with his reading of the play, clean skills, composure and decision making among his abilities. He uses the ball so well he has primarily been used in that offensive role out of defence. Clark does have areas to improve on to take his game to the next level such as endurance and building a contested game so he can push into the midfield in the future. Overall, Clark has been touted as a top 10 prospect, with the West Australian sure to land somewhere in the top 25.

As an attacking half-back flanker, Clark has a lot of attributes that can see him become a star of the AFL from the get go. First and foremost, Clark shuts down his direct opponent and once he is clear to do so, he will provide his team with attacking and driving rebound from defensive 50.

Like Geelong star Zach Tuohy, Clark’s reading of the play is exceptional, his skills are immaculate and his composure under pressure is remarkable. He knows when to drop off his opponent to support his teammate or when to burst away and provide an option for exiting out of defence.

Even under heavy pressure, Clark is super composed and has the uncanny ability to look as if he is playing against opponents who are in slow motion. His vision to spot teammates in open positions is excellent and his decision-making to choose the right option is outstanding for someone his age. And then with his bullet-like passes, Clark is able to get his team out of trouble.

For the club that picks up Clark, they will want him to build up his endurance so he can push into the midfield or onto a wing. In saying that, his endurance is still solid, but to become a full-time midfielder it will need to improve. He has all the offensive traits to be damaging off a wing, but is still a little while to go before he could play in that role for four quarters. Another aspect that Clark could work on is his contested possession, however with his outside game at an elite standard it does not require immediate attention. It is always important for players to build up their contested game, and if Clark can achieve that, then he becomes a more rounded, balanced player.

Clark is one of the best attacking half-back flankers who has the potential to become a premier wingman of the AFL. He has great skill under pressure and could be a real star of the future if he continues his upward trajectory. Clark’s ability to read the play and use his instinct to assist his teammates is second to none and will go a long way in the future, with the running half-back just having to improve his endurance and work on his contested game so he is able to push into the midfield in the future.