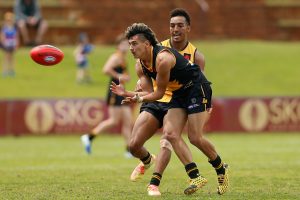 DRAFT ANALYSIS: “Western is a dynamic and skilful midfielder who also poses a threat when moving forward.” – Lenny Fogliani

A member of the Fremantle Dockers’ Next-Generation Academy (NGA), Joel Western is a leading small prospect among 2020’s potential AFL Draft pool. In 2019, Western finished second in Claremont’s Best and Fairest, eighth in the WAFL Colts Coaches Award, and was a key member of the Tigers’ premiership triumph over Peel. Fast forward to 2020, and Western further enhanced his draft stocks with a stunning season. He won Claremont’s Colts’ MVP Award, was named Claremont’s best player in the 2020 Grand Final, and won best afield honours in game one of the NAB AFL U18s All-Stars Exhibition Match. His second outing in the black and gold was cut short by a dislocated finger, while a hamstring strain halted his hot early-season form. Nonetheless, Western has shown more than enough to suggest he could push to be a top 30 prospect this year.

With a rare athletic combination of speed and endurance, Western has proven to be an effective midfielder who burns and weaves away from congestion with aplomb. Though given his size at just 172cm and 68kg, it is difficult to see the 18-year-old remaining a permanent midfield fixture at AFL level. That is why his form forward of centre is so promising, with goals and creative energy in the front half also key pillars of his game.

Western’s smarts, combined with his skillset make him an extremely dangerous small forward who makes defenders nervous. His performances against Subiaco in Round 1 (29 possessions, one goal), Perth in Round 6 (24 possessions, three goals) and East Fremantle in Round 7 (20 possessions, seven inside 50s) demonstrate his attacking prowess on the football field. With electric pace and a high-level running capacity, Western’s nous could also be useful on the outside at the elite level.

The Claremont product’s disposal is also often sound, able to take on seemingly low percentage options and make things happen with sharp execution. The main question on Western will be his ability to handle contested situations within the game, especially considering aforementioned his size. While he has the ability to win ground level balls and swiftly zip away, Western’s ball use out of congestion is sometimes rushed. With time and experience against bigger bodies, that is something which can be ironed out. When afforded more time and space, he has the ability to carve up the opposition and prove damaging in possession.

As far as sub-175cm players go, Western is a very well-rounded and dangerous prospect. At that size, you have to tick a lot of boxes and Western certainly does so with his range of elite attributes. It would have been handy to see him handle senior football this year, but it just didn’t pan out that way. Nonetheless, Western should have little trouble adjusting to the speed of elite level football, but his durability may be tested. A place on the wing or up forward should suit early given the strength of Fremantle’s young midfield, which he could certainly rotate through for impact in future.

Given his NGA ties to Fremantle, Western could slide to a later pick with the potential to then prove a draft steal. His ability to create scoring opportunities from the forward half is extremely appealing. With his terrific mix of speed and skill, he may appeal to clubs such as Adelaide, Carlton, GWS, Hawthorn, Port Adelaide and the Western Bulldogs in the bidding process. A bid could well squeeze the Dockers’ draft hand from the middle of the second round, onwards.