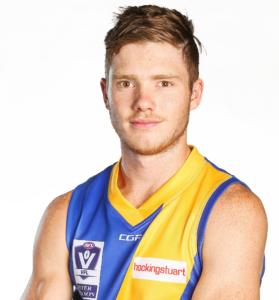 A REMARKABLE prospect in many ways, with the 198cm forward/ruck capable of extraordinary things considering his athleticism. He possesses an elite vertical jump (91cm running and 79cm standing) as well as a 2.98-second 20m sprint. If he can build his endurance and strength further, he is a mature-age option for clubs. At 23-years-old he is still young enough and is good overhead and in front of goal. His 22 goals in the VFL this year were headlined by a hat-trick of three goal hauls for Williamstown, while also pinch-hitting in the ruck to have as high as 30 hitouts. Maintaining that level of form will be Ottavi’s next challenge, with his impact across all four quarters another given his average of just eight disposals and five games below five touches this year. But like many talls, he is developing in time and is approaching the ideal age.