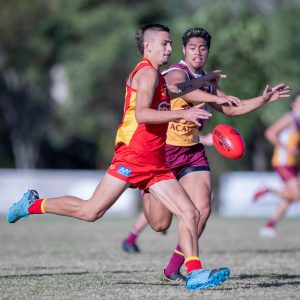 DRAFT ANALYSIS: “Jeffrey is an exciting key position prospect who utilises his terrific reading of the ball in flight and athleticism at either end of the ground.” – Michael Alvaro

Arguably the leading Northern Territory (NT) prospect in this year’s draft pool is Joel Jeffrey, an athletic key position player who can ply his trade both forward and back. Listed at 192cm, Jeffrey is not only able to dominate aerially with his sound reading of the ball in flight, but can also bide time, break lines, and hit targets with aplomb at ground level. He has turned out for many a representative side; selected to play in last year’s Under 17 Futures All-Star showcase, the Under 18s Allies team, the NT Thunder Academy, Gold Coast Suns Academy, and NT Under 16s side, among others. Jeffrey has senior experience having played top flight NTFL football with Wanderers, also seeing NEAFL action as part of the NT Thunder squad. The son of former St Kilda and Brisbane Bears player, Russell, Jeffrey is not quite eligible under father-son status, but is tied to the Gold Coast Suns due to their rights to the Darwin zone.

The thing which stands out most about Jeffrey is his athleticism, both aerially and across the ground. Perhaps most significantly given his height (192cm) and position, Jeffrey’s springy vertical leap aids him when picking the ball off at its highest point. Speed off the mark – highlighted by a 20-metre sprint time of 3.020 seconds at the Queensland Draft Combine – aids him in his ability to gain separation on the lead when playing forward, while also allowing him close on contests down back. His agility comes to the fore as he quickly turns opponents and moves towards goal with ball in hand, while also allowing him to bide time in the back half. Add that speed back to the equation, and Jeffrey breaks lines before hitting targets with exceptional vision and sharp execution via foot.

Jeffrey’s rare ability to translate that package of traits to his craft at either end bodes to his enormous versatility, which will come in handy at the next level. While he played predominantly forward for Wanderers during the 2019/20 season and in the 2020 NT Under 18 All-Stars game, Jeffrey is more adept to playing down back in an academy setting. He played there during his NAB League stint with the NT Thunder Academy and also started there while turning out for the Allies and Gold Coast Suns Academy. But with that swingman trait under his belt, Jeffrey becomes somewhat of a wildcard who can be thrown forward should his side require an extra spark or quick goals. He can kick bags too, with three goals leading out of the goalsquare in the All-Stars game, and multiple hauls of over four goals for Wanderers.

What primarily makes him such a dangerous forward is his aerial prowess, as his reading of the ball in flight is almost unrivalled among his peers. When allowed a run and jump at the ball, Jeffrey is very difficult to stop and is known to take a few highlight-reel marks. He adapts that ability to his defensive work, able to intercept and then set up attacks in an aggressive fashion. His smarts have seen him fare well in one-on-one situations at this point, but his strength is an area which can be improved to further enhance his all-round key position craft. With a couple of preseasons under his belt, Jeffrey is a player who can make up for a lack of centimetres aerially in a key position post, but also build the strength to compete there.

Another area to develop will be his endurance, with a 2km time trial score of 7:35 leaving plenty of seconds on the board which can be cut. Gaining a greater running capacity will better allow Jeffrey to attend repeat contests, not just relying on his speed to intercept, but also a sound work-rate. It could also see him favour the third tall role up either end, or better utilise his marking game as a lead-up target outside of forward 50. With is athleticism, don’t rule out that tall wingman role in the future, either.

It is nearly inevitable that the Suns will pre-list Jeffrey thanks to their draft concessions, effectively meaning they can bring in a top 25 talent at no cost. In an open draft, Jeffrey could have pushed for first round status, such is his arsenal of weapons and the excitement he brings to the fold. He still looms as somewhat of a long-term prospect with enormous upside, able to play at either end of the ground. While it seems he prefers to play forward, defence may prove to be his starting point and his previous senior experience means he may come on even quicker than expected.