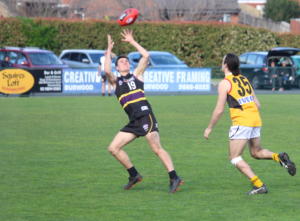 An outside runner who can play up either end, Boyer transitioned from a half-back to predominantly a half-forward by year’s-end. Also capable of pinch-hitting in the midfield, Boyer’s next goal is to build his endurance and improve some of his athletic traits, as he was consistent as a lead-out forward this year, showing clean hands in traffic and a sense for goals. Boyer could also improve his kicking consistency at the next level, averaging 1.9 clangers per game from 53.4 per cent efficiency. Given he has the versatility and flexibility within roles to play a lead-up or crumbing forward, or running half-back, ironing out those kicking mistakes will be the next step. Overall, Boyer has some nice traits and provides good run and carry around the ground to set up scoring opportunities.