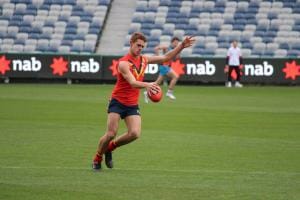 DRAFT ANALYSIS: "Composed and poised defender, with courage and skill in the air, and elite rebound skills by foot"

Jez McLennan is a medium sized defender and played as part of South Australia’s National Championships winning team as a vice-captain and also earned All Australian honours. McLennan’s ability to drop back and place himself in the hole and take a contested intercept mark stood out during the National Champs. A good size, he was confident to go for the marks, and when one on one was rarely beaten. With the ball-in0hand McLennan has real poise and seems to find time to then execute a rebound kick or handball to a teammate – all done with a calmness and maturity beyond his 18 years. Then when given the chance, he takes off to create an extra and covers the ground well to either create space, or get it back again. Having played mainly Reserves and League for Central Districts this season, he easily handles the size of his opponents and would be ready to play next year, and if he could get some more footy would be even more effective and damaging.

Taking an intercept mark is a crucial and important skill, as it encompasses not only the physical skills and courage of dropping in front of the oncoming forwards, but also importantly the mental skills of deciding when and if to leave your own man, whilst giving yourself enough time to get to the contest, make an impact or take the mark and McLennan does this well. He is able to fill the hole well in defence and position himself well in the back 50 to take a strong grab and then use his slick skills to kick it out of the danger zone. As a defender he also shows real composure and poise when he has the ball to provide a calmness and surety when his team is bringing the ball out of defence, and this also saw him selected as one of the South Australian vice-captains. His leadership on the field is evident and he shot up the ranks nation-wide with some of his good decision making and foot skills off half-back. As he demonstrated, particularly since the National Champs, McLennan has the ability to hit the target from 25-30m consistently and is one of the better users in the draft crop. While as we note he needs to build his consistency and find more of the football, what he does with ball-in-hand is very impressive.

McLennan can seem to go quiet during some games, and whilst that may mean he has done his job on his opponent, an area for improvement would be to increase the impact he has on more games. As when he has the footy it gets used well. Having played only in the League and Reserves this year as well his confidence should grow to take the game on as he matures. At the National Under 18 Championships he looked composed and while he had his good moments and some quieter patches, he has shown what he is capable of against his peers. The other improvement which will come with time, and links back to the consistency, is accumulation. McLennan is not a huge ball winner, demonstrated by his 13 disposals per game at the championships, and averaging single digit disposals in three of his four League games. Nonetheless, his ability to make the most of his touches is the key, and recruiters would enjoy the fact he does not waste too many disposals.

Jez McLennan is a classy intercept marking defender with strong one on one ability and with the ability to grow into a more attacking and impactful defender. He can take his own high mark, or has the courage to drop in front of the full forward and then rebounds with poise. A naturally quiet young man will be one of those players that gets to 100 games quickly and you do not even realise. He has some suitors interested in that top-end of the draft, with a second or third round draft selection expected for the classy user.