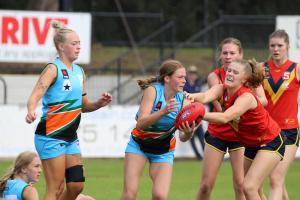 Jess Doyle captained the Sydney Swans Academy in its inaugural NAB League Girls game, and has some seriously eye-catching traits for the future.

Jess Doyle is the epitomy of the Northern Academies pathway having come through the local level and receiving the support to progress to the elite junior level. Now captain of the Sydney Swans Academy and a member of the AFL Women’s Academy, Doyle is the standout prospect from NSW/ACT.

Doyle is still raw in the way she plays and is learning more about the game with every passing moment. But one thing is for sure, she already has the traits that make her such a damaging prospect. She is clean in the air and at ground level, hard at it and competitive as they come, and rarely gets beaten in one-on-one contests.

Despite not being overly strong, Doyle just positions herself well and has great hands and read of the ball in flight to know when to time her leads and find space inside 50. Her forward craft is what makes her so dangerous when roaming around the forward line, and the fact she can go into the midfield and have an impact too is testament to her versatility.

Doyle is a player who benefited from being able to play against the nation’s best, holding her own at the AFL Women’s Under 19 Championships, where she averaged 17.5 disposals and 4.5 marks, predominantly playing as a high half-forward. Not only were her numbers impressive, but she generally uses it so well, and if she is not scoring, she is setting her teammates up.

Once Doyle is able to get into an even more elite environment, she has the opportunity to develop even further, and once she builds more strength and endurance, she can impact for longer stints in the midfield. Based on her 2021 form, it is exciting to see just how far the talent has come and no doubt the Swans will be keeping a close eye on her for the future.

“Whilst a raw talent, Doyle looked natural up forward with her speed off the mark, leap, overhead mark and goal sense making her a damaging player when inside 50. She also pinch-hit in the midfield and used her one-on-one ability at both ground level and in the air, to match it with more experienced players and win her fair share of the ball.” – Peter Williams via “2021 AFLW Draft Positional Analysis: Tall/Medium Forwards”

“It was a really good experience, being able to lead the first Sydney Swans team interstate against Geelong was an amazing opportunity and I’ll always be grateful for that,” – Jess Doyle via “Competitive Doyle embraces “amazing opportunity”

“The Sydney Swans Academy captain and AFLW Academy member showed good marking prowess throughout the contest, finding a way in front of her opponent often to take it cleanly on the chest or out in front. Although Doyle did not end up getting herself on the goal scorers list for the game, she did plenty to attempt to set up her teammates, selflessly looking to involve them in the game in any way she could. When in open play with ball in hand, she oozes class, with an incredible ability to get around opponents or stand up in tackles to deliver a handball to an outside runner, when she herself gets free, her left foot will more often than not find a teammate on the lead.” – Declan Reeve via “Top Performers: 2021 AFLW U19s Championships – Thursday, April 15”